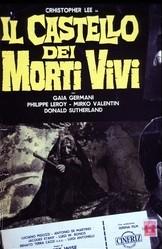 When you hear that a lead actor like Christopher Lee had to improvise most of his lines while dubbing the film afterward because the woman in charge of continuity lost his script you wonder what kind of movie you might be in for.  Truth is, Lee starred in so many of these movies as a villain of some sort that his lines were probably interchangeable from movie to movie.  What amazes me is that he even remembered doing many of these quickie films.

This one is an Italian production which is also known for being Donald Sutherland's movie debut.  The director, Warren Kiefer, is best known for being his son's namesake.

Bruno (Jacques Stany) leads a troop of actors shortly after the Napoleonic wars, the main act which features him as an executioner and the harlequin Dart (Luciano Pigozzi) as a criminal to be hanged.  After a dispute over money, Dart quits, making threats toward Bruno and stealing the horse of Eric (Philippe Leroy), a former army captain.  Eric agrees to join in Darts place when they receive an offer from a strange man named Sandro (Mirko Valentin) to perform for the local Count Drago (Lee).

Eric begins working his wiles on Laura (Gaia Germani), the female member of the troop, while the dwarf Nick (Antonio De Martino) has forebodings of his own after the group is warned by a witch (Sutherland) about going to the castle.  Bruno, caring most about money, decides to continue on to Drago's castle, which is filled with taxidermy.  Drago explains that he is working on ways of perfectly preserving animals after death.

Of course, those animals also include humans, and Bruno is given cognac with the Count's serum.  He dies during the hanging scene, and Dart, still on the loose, is blamed.  A local gendarme (Sutherland again) visits the castle and learns of the death and agrees to go after Dart at Eric's behest.

Drago's intentions become apparent after Nick's performance partner Gianni (Ennio Antonelli) disappears and Sandro attacks the dwarf, who is rescued by the witch, who reveals that she was Drago's first human experiment.  It is up to him and Eric to save Laura and bring the Count to justice.

Donald Sutherland plays three roles, and I confess I didn't know he was playing the witch throughout.  I thought he was just playing Sgt. Paul, the bumbling policeman, but he also plays another role as an old man in the film.  Christopher Lee, despite having to guess at his lines, still is gives it his all, but it is Mirko Valentin as Sandro that is the real sinister presence here.

While the movie is standard (and predictable) Gothic fare, it is still quite fun.  I am also happy that Nick gets to be quite a hero in this rather than being treated as comic relief.