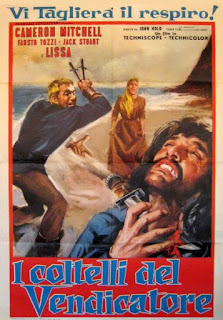 Mario Bava is largely known for his horror films, and rightly so.  It was largely he that set the foundation for Italian horror, as well as for giallo suspense films.  That didn't mean that, like most Italian directors, he didn't take on jobs for hire from time to time.

Knives of the Avenger was toward the end of production, but it was running over budget and causing a headache for the studio.  After firing the original director, Bava was brought it to complete the film.  Instead of just completing it, he rewrote it and refilmed it in the course of three days.

The result?  A halfway decent blending of sword and sandal adventures with the sensibility of a spaghetti western.

Viking princess Karin (Elissa Pichelli) is warned by her tribe's soothsayer to flee with her son Moki (Luciano Pollentin).  Karin's husband Arald (Giacomo Rossi Stuart) has been gone for three years, and is feared dead when his ship was sunk off the coast of Britain.  Seeing his chance, Hagen (Fausto Tozzi) returns from exile to claim the Arald's throne, as well as Karin for his wife.

Karin leaves her royal digs for a farm in the country.  One day, Helmut (Cameron Mitchell), a wandering warrior arrives looking for food and lodging.  She initially refuses him, but then decides to let him stay after he defends her and Moki from two of Hagen's henchmen.  He begins to be a father figure for the boy, teaching him how to use a bow and throwing knives, the latter being Helmut's preferred weapon.  He also begins to fall in love with Karin, but she rejects him, believing that Arald may yet return.

She reveals to him that Hagen was exiled after killing the wife and child of a king named Rurik, whom had recently become allies with her father due to her marriage with Arald.  The murders result in Hagen's exile as well as Rurik's vengeance upon Karin's family, culminating in her father's death and her rape at the hands of Rurik himself.  In the end, Rurik decides to spare Arald and concentrate his revenge on Hagen himself.

Karin never saw Rurik's face, but Arald did - and that is revealed to be Helmut, who may also be Moki's true father.

While Hagen decides to further press his marriage demands on Karin, Rurik decides to challenge him.  Hagen escapes and kidnaps Moki.  However, Arald does in fact return and, after briefly battling with Rurik, the two ally to rescue Moki and put an end to Hagen once and for all.

IMDB says that the total budget for this film was $75000.00, but I am wondering if that was just what was invested for the three days that Bava spent filming and post-production.  It is obviously on a shoestring, but the sets are not bad, even if the costumes seem a bit laughable at times.  There is a fair amount of cheese, especially in the dubbing.  I am wondering if the sets were already built and not included in the final budget, or if they did what a lot of productions did and reuse material from previous films.

As for the story itself, if you substitute "reformed gunfighter" for "ex-Viking king with throwing knives," you can pretty much guess what you are in for.  There are two saloon fights - the first one not a knock-down drag-out affair, but instead one of those Mario Bava moments that make even a cheap, by-the-numbers production like this stand out.  It largely takes place in the dark, with Hagen and Rurik exchanging knife throws.

The second is more traditional, but involves Rurik and Arald going at each other in such a manner that it results in them going out the back wall, down a hill and, finally, having to face each other on the beach before coming to terms.  This is also one of the places I think the lack of a budget helped: the swordfights are largely laughable affairs, but the fist fights seem like there wasn't too much time for rehearsal and that many of them may have accidentally landed.  I have a feeling that after three days what little everyone got paid was probably spent on bandages and slings.

Despite everything that should be (and is) wrong with the movie, I found it highly enjoyable.  Not a required watch by any stretch unless you are a Bava fanatic, but I wish more b-movie films of this type were anywhere near as fun.