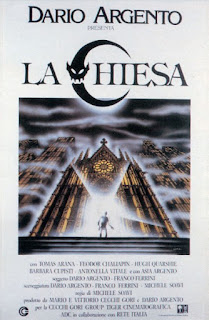 Since his name is so proudly displayed on here, I first thought this film was directed by Dario Argento.  It confused me because I didn't remember him doing a movie called The Church at this point in his career.  This would have still been during the waning years of his most creative period leading up to Trauma, and I've pretty much seen what he has to offer at that point.

Instead, this movie is directed by Michele Soavi, who five years later would direct Cemetery Man, which was one of my first introductions to Italian horror.  Cemetery Man was sort of a weird experience for me at the time, largely because it was advertised in the U.S. as a straight zombie film, with no mention of it being from an Italian director.  The atmosphere, and particularly the ending, were a bit of an obstacle for me until I got a bit older and started appreciating that style of cinema a bit more.

Since The Church was only presented by Argento, it was interesting to see Soavi at an early point.  And, not surprising, there is a good amount of the atmosphere he would bring to his later films, but Argento's fingerprints are all over this.

Evan (Tomas Arana) arrives at a Berlin cathedral to sort and catalog its extensive library.  He quickly becomes enamored of Lisa (Barbara Cupisti), who is restoring one of the church's frescoes.  He is late to his first day, much to the annoyance of the Bishop (Feodor Chaliapin Jr.), but he also manages to win over the sacristan's daughter Lotte (Asia Argento).

While doing some renovations, workers find that some spaces below the church are hollow.  In the work area Lisa also finds an old manuscript.  Evan attempts to decode it, eventually discovering that it tells of a "stone with seven eyes" in a secret part of the church.  He does find it and, in doing so, injures himself and, through the injury, becomes possessed by a demon.

When he starts to spread the possession to others through his blood, an ancient security device built by the architect of the cathedral goes into affect, locking down the church so no one can get out.  The reason for this has to do with its secret: centuries before the inhabitants of a village, thought to be possessed by demons, were put to death by a religious order of knights and the church built upon their mass grave.  Only, they were never really dead, and the architect after building the church was buried on the premises, with the Church announcing that an attempt to bury anyone else there would be an act worthy of excommunication.

In order to contain the demons the architect included a spot in the cathedral which, if pressed, could bring the whole of the building down, burying the evil beneath it.  The Bishop learns of this and tries to hide it, believing that it is time the world be punished.  Father Gus (Hugh Quarshie) also finds out about it and attempts to find the architect's resting place so that he can put an end to everything.  Meanwhile, Lotte may just know a way of getting out of the church despite the lockdown, and she has secrets of her own that stretch into the dark past.

There is quite a bit here that reminded me of Lamberto Bava's Demons, only this takes place inside a church instead a movie theater.  Some of the characters are even similar, as if this was sort of an alternate take of that movie.  There are some shocking death scenes, as well as parts (as usual) that are unintentionally hilarious.  Some of the weird humor of Soavi would later use is missing here, but the dreamlike meandering plot is very much in line.

The Church is, however, cowritten by Dario Argento and largely Michele Soavi seems like a hired hand.  It also has Asia Argento in an early role as a rebellious teenager, and she's not bad.  The other actors are largely passable, with Hugh Quarshie being the only one who really stands out.

It may not be a great example of the genre, but it is an interesting look into the beginnings of one of the later directors of Italian horror cinema, as well as another Dario Argento film even if it wasn't directed by him.