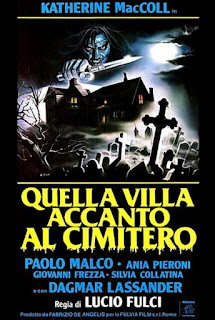 Lucio Fulci's string of famous horror films began with Zombi, which was a pseudo-sequel to George Romero's Dawn of the Dead.  From there, his movies became known for their high gore content and dreamlike atmosphere, but not so much for coherent plotting.

Viewers who appreciate that in Fulci's other horror films will find that The House by the Cemetery is quite a bit more staid, but still with some twists.

Lucy (Catriona MacColl) and Normal Boyle (Paolo Malco) move from New York to a small town in Massachusetts.  Prior to the move their son Bob (Giovanni Frezza) sees a girl (Silvia Collatina) gesturing at him from a picture of a large house and telling him not to come.  His mother dismisses his fears, but is surprised when she sees the house they are moving to is the same one as in the old picture.

The reason for the move is that Norman is taking up where a colleague left off, doing some research in the town.  It turns out his predecessor ended up getting sidetracked by the legends of a Dr. Freudstein, a surgeon that used the house they moved into for his impromptu experiments.

Things are definitely not peaceful for the Boyles.  There are sounds in the house, a literal tomb in the hallway and basement that is boarded up.  There are also a number of strange deaths and disappearances that occur, culminating in the family fighting for their lives after Norman discovers what his friend did: Freudstein, despite being born in the 19th century, is still very much alive, and still carrying out his experiments.

Unlike his other horror films this one drags a bit.  I think it is because there was a conscious effort to make this a straightforward haunted house mystery.  It still has plenty of the expected gore (and the makeup effects in Fulci's films are always great), but it is easy to guess what is going on from the beginning.

It is still quite a decent film, but just don't expected the same type of atmosphere as The Beyond or City of the Living Dead.