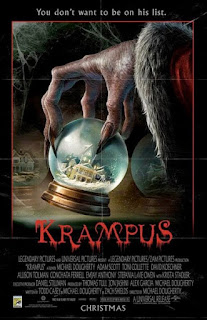 Christmas horror films can be summed up two ways: Silent Night, Deadly Night and Black Christmas.  Both slashers, the former largely cashing in the genre while the latter one of the earliest examples (and directed by Bob Clark, who would also do Christmas Story).  They are genre classics, but at least Silent Night's killer in a Santa outfit became highly controversial.

It seems like the only movie to get mainstream appeal combining Christmas and horror was The Nightmare Before Christmas, and there is still a lot of argument about whether or not it is a Halloween or a Christmas film (I say both).

It is in this atmosphere that Michael Dougherty gives us Krampus.  Not surprisingly, his only other major movie he has directed so far was Trick 'r Treat, which is one of the best Halloween movies ever made.  It has some flaws, but its pseudo-anthology style did a better job of reminding us of Tales from the Dark Side than the actual movie from that series did.  That means there were some high hopes for Krampus.

Max Engel (Emjay Anthony) tops off an eventful day of Christmas shopping by getting into a fight during a school pageant with another kid who said there was no Santa Claus.  Max knows he's getting older, but still wants to hold on to some beliefs that world could be better.  His parents (Adam Scott, Toni Collette) are on edge and his sister Beth (Stefania LaVie Owen) is growing up.  The only one he seems to connect to is his grandmother (Krista Stadler), his father's mother, who is originally from Austria.

To make things worse, his aunt Linda (Allison Tolman) and uncle Howard (David Koechner) have shown up with their three kids and the critical, racist Aunt Dorothy (Conchata Farrell) in tow.  After being bullied by his two twin cousins (Queenie Samuel, Lolo Owen) over still believing in Santa, he gives up and rips up the letter he was going to mail to the big guy up north.

This is just the signal a certain other Christmas spirit needs to step in.  The neighborhood is suddenly isolated by a blizzard.  All power goes out and the neighbors apparently have all disappeared, being hauled away by something terrifying.  Beth decides to go visit her boyfriend and make sure he is okay, but is set upon by the a goatlike being and his minions.

Soon the family itself is terrorized by all different means: killer toys, evil elves and what appear to be demonic entities.  Only the grandmother knows what is going on, as it happened to her village when she was a kid.  She gave up hope on Christmas like Max did, and Krampus, known in Austrian legend for hauling away bad children to the underwold, came and took her family and all the village with him, leaving her as a witness to warn others.

Now Krampus is back, and the family must come together to fight to survive and, in the end, it is up to Max to figure out what to do.

I know that there are some discrepancies here, as Krampus shows up on December 23 rather than his usual appointed time (December 5), and isn't specifically after the bad children.  It is a different take on the legend, but certain things are still the same: he is but one of a number of Christmas spirits, some kind, some frightening, some both.  He is described as the "shadows of St. Nicholas," but, truthfully: isn't Santa Claus himself intimidating when you're a child?  Krampus was the stick to Santa's carrot in many legends, and that is still what he is here.  It's also quite in line with Dougherty's previous film, as the ones who get punished by a certain "spirit" of the season are the ones who do not believe.

This also has that Tales from the Dark Side feeling, combined with National Lampoon's Christmas Vacation.  David Koechner and Allison Tolman's characters are purposeful takes on those of Randy Quaid and Miriam Flynne's characters from that particular film, which has become a classic.  It is almost as if Michael Dougherty decided to combine The Grither episode from Dark Side with Christmas Vacation, and it works quite well.

There is a nice combination of CGI and practical effects, the latter largely being the Krampus costume itself.  Most of the atmosphere is the isolation that results from the neighborhood being cut off from the rest of the world.   It mirrors the fate of the family if Max does not step in: forever isolated in Krampus's lair, never to return to their loved ones.

I am not going to reveal the ending, but it does leave things a bit vague, at least in the movie.  There is a comic book tie-in written by Dougherty and his co-writers that supposedly clears things up, but it can still be interpreted in a couple of different ways.

I really hope that there is not a sequel to this at any point.  I don't know if this will grow into a holiday tradition like Christmas Story or Christmas Vacation, but it certainly deserves a chance to do so.