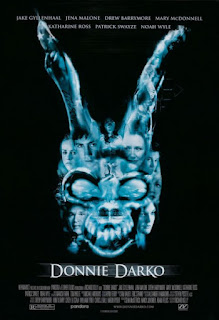 I have seen Donnie Darko in both of its iterations.  I originally saw the director's cut, and I truly liked the way the CGI was largely used to try and piece together much of what was happening in Darko's life.  Upon seeing the original theatrical version (as well Richard Kelly's other major movie, Southland Tales), I have to say that the original, though more confusing for some, is the better one.

The reason I mention Southland Tales is that it makes Donnie Darko appear to be even more the brilliant fluke that it is.  In the director's cut of Darko, more of Kelly's self-indulgent nature begins to surface, and although it wraps things up in a neater package, it is obvious that through most of the process he is throwing ideas against a wall to see if they stick.  He then expects everyone to "get" the hodgepodge, and the so-called director's cut seems at this point an effort to tie those pieces together after the fact as well as mock those who couldn't get it.

Doesn't mean that, no matter how you look at it, this still isn't a great movie, luck be damned.

Donnie Darko (Jake Gyllenhaal) is a boy with a number of troubles, sleepwalking being among them.  His parents (Holmes Osborne and Mary McDonnell) love him and do the best to accommodate him despite the fact he lashes out constantly.  Rose, his mother, has enough on her plate with her daughter Elizabeth (Maggie Gyllenhaal) getting ready for college and youngest Samantha (Daveigh Chase) working hard for an upcoming competition with her dance troop Sparkle Motion.

Things radically change when Donnie's sleepwalking leads him to be absent when his house is hit by the engine of jet airliner and landing specifically in his bedroom.  Even stranger, authorities can find no record of flights going over his neighborhood, nor do they have any aircraft missing engines.  The FAA agrees to put the family up in a hotel and repair their home in exchange for them keeping quiet about the mystery.

It is not too long before Donnie meets the source of the voice that led him away from the house.  It belongs to Frank (James Duval), a man dressed in a strange bunny suit who seems to be at the other end of a dimensional wormhole.  Frank warns Donnie that the world is going to end in less than a month, on November 1, 1988.

Meanwhile, strange things begin to happen around town.  The school is flooded and an axe driven into the head of its mascot, leading uptight Christian teacher Kitty Farmer (Beth Grant) to connect the vandalism to the fact that a new teacher at the school, Karen Pomeroy (Drew Barrymore) is teaching literature that Kitty considers inappropriate.  Instead, she insists that what the kids need is the motivation from Jim Cunningham (Patrick Swayze), a huckster who lives in town and has become rich selling his self-help videos.

Meanwhile, Donnie himself falls for Gretchen Ross (Jena Malone), a new girl in town who lives with her aunt due to her parents being killed.  Both are damaged and find solace in each other in different ways.  He begins telling her about Frank, and with some help Prof. Kenneth Monnitoff, who teaches science at their school, Donnie gets a hold of a book called The Philosophy of Time Travel, which appears to have been written by a reclusive woman known locally as Grandma Death (Patience Cleveland).  Her real name is Roberta Sparrow, and she was once the science teacher at the school, but now spends her time checking her mailbox for letters that never arrive.

As the date for the end of the world approaches, Donnie learns from the book more of what is happening to him and what he needs to do so that the world can go on.  His realizations also begin to manifest in him acting out in more and more rebellious ways, laying open a number of secrets that shake the town.

While Maggie Gyllenhaal has gone on to set herself apart from this film (Stranger Than Fiction comes to mind), Jake at this point will be linked to this throughout his career.  His portrayal of Donnie as the mirror to many of the characters you would find in a John Hughes comedy of the 1980s is quite convincing.  He is alternately shy and rebellious, and it is through his (and Frank's) efforts that this utopian world is shattered.

The science exhibited here is anything but.  However, it is important to remember that we are looking at the "philosophy" of time travel, rather than anything having to do with reality - especially since reality throughout is proven to be quite malleable.

If you want to see both, they are typically together on the Blu-Ray version, but I suggest starting with the theatrical cut and only watching the director's version if for some reason you don't get what's going on.  Donnie Darko has a reputation of being hard to follow, but it is quite simple once you accept what is going on, and quite effecting as well.  Maybe we will see something like this from Kelly again in the future, but it seems quite doubtful.