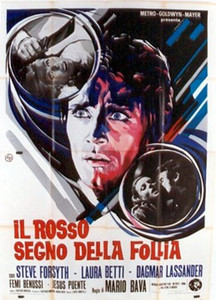 For me, Mario Bava is a name that should be mentioned next to Federico Fellini and Sergio Leone when we are talking about great Italian directors.  Sure, he may have been largely a genre director.  His narratives are relatively straightforward, we don't get sweeping vistas and epic storytelling.  We do, however, get imagination and, despite being a genre director, a stubborn defiance of being stuck in any one.

That brings us to Hatchet for the Honeymoon, which itself refuses to stay within one genre.

Fashion designer John Harrington (Stephen Forsyth) is rich and successful.  He is also happy to tell us that he is a madman.  If we need further proof of that, we are introduced to him dispatching a happy couple on a train following their wedding.

Not only that, but he has multiple women buried in his hothouse - that would be the ones he didn't just decide to incinerate.  A number of them are models, and the police are starting to get suspicious about why his models are missing, and why all the murdered women are wearing his company's wedding dresses.

His wife Mildred (Laura Betti) doesn't care as long as the money keeps coming in.  John has been trying for a divorce for quite a while, but Mildred refuses to give it to him.  When she says she is going away for a week, John decides to jump at the chance to have some fun with his newest model, Helen (Dagmar Lassander).  However, Mildred purposely comes back to ruin his fun.

To John, the killings serve a purpose.  His mother was murdered on the night of the wedding to her second husband, and with every death John gets to see the face of the killer a little clearer.  The killings don't bother him much, but he does start to develop feelings toward Helen, such that he tries to push her away before she can become a victim.  His wife, however, is a different story.  Finally fed up, he decides to take care of her in his usual way.

Unfortunately, Mildred has other ideas.  Death isn't going to keep her from ruining John's life.  Her ghost purposely appears to others, while not appearing to him.  It leaves him in a position where he can't admit she's dead, since he'll be the first suspect, but also can't live the life he wants because everyone believes his wife is still alive.

Typically calm, cool and collected, John begins losing what is left of his mind.  Unfortunately for him, the cops appear to be closing in on him as his life crumbles around him.

Not as typically garish with the colors as most Mario Bava films, Hatchet for the Honeymoon hinges on its strange plot, and it is quite entertaining throughout.  Stephen Forsyth makes a convincing madman, while Laura Betti is great as a wife that would drive a sane man to the brink.  The killings are heavily stylized, so don't expect a true gorefest.  Probably a good idea, as it leaves a bit more to the imagination, and Italian films were not always known for their convincing makeup effects.