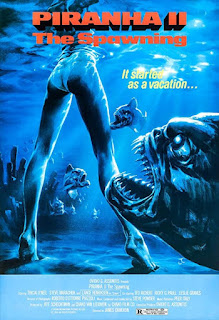 I always thought that, like the first Piranha film, this was another quickie done by Roger Corman.  Instead, it was produced (and mostly directed) by an Italian film maker named Ovidio G. Assonitis.  As a stipulation for doing the film it had to have an American director, so Assonitis early on decided he would get someone whose name would be on it to fulfill that need, but whom he could fire almost immediately so he could take over the project.
James Cameron didn't know any of this.  Assonitis had originally hired Millard Clark, who had worked with Corman, but got rid of him almost immediately.  Cameron had been responsible for the special effects and set design on Galaxy of Terror, one of Corman's Alien knock-offs, and came highly recommended.  Unfortunately, when Cameron arrived in Jamaica, he found that nothing had been scouted and practically no preparation was made for the film.  He rewrote the script, scouted locations, made a number of the rubber puppets that would become the monster fish and began filming - only to find himself off the project after less than two weeks.  His attempts to edit the film into some sort of coherence that followed his script were met with resistance and, by the time the movie came out, he just wanted his name off of it - something that he couldn't even bring legal action for as he sleeping on a friend's couch and was far from being able to afford legal help.
On the Caribbean island of Elysium the local hotel is getting ready for the annual Spawning Festival, in which grunion come up to the beach for some private time before heading out to sea.  Guests get to catch as many of the fish as they can to fry up.  Unfortunately, when out with her diving students, Anne Kimbrough (Tricia O'Neill) loses one of the divers and finds him half-eaten in the wreck they were exploring.  Her ex-husband Steve (Lance Henriksen), who serves as the island's chief of police, thinks initially that she was the one who was negligent.
As the bodies begin to pile up it soon becomes apparent that something is amiss, and that is confirmed by Tyler Sherman (Steve Marachuk), a government biochemist who has been flirting with Anne.  He reveals that the ship went down with barrels of eggs that had experimental fish - a mixture of flying fish, grunion and piranha - and that all but one barrel had been retrieved.  Anne and Steve try to convince hotel manager Raoul (Ted Richert) to cancel the celebration as it becomes apparent that the island is under attack by flying piranha.
The special effects on this, despite being initially designed by Cameron, are laughable.  Rob Bottin, who did the special effects for Piranha, may have pulled rubber fish along on a line, but he had the foresight to do it in murky water so it didn't matter.  This movie tries to up the original by showing the piranha more often.  The problem arises from the fact that most of them are hand puppets, not to mention that "flying fish" are so called because they jump out of the water and glide a short distance.  They do not flutter around like hummingbirds. The centerpiece, a massacre of guests on the beach, has a few decent gore effects but is hampered by the fact that either the actors or someone off-screen is shoving a fish puppet at their necks.
As said before the low quality of the film, and the fact that the original studio refused to release it because it was so awful, came down to Ovidio Assonitis.  James Cameron later did what he could to improve it by re-editing the movie for laser disc release so, even though his actual footage that he directed may be small in the film, he has his fingerprints on it.  I was surprised that he didn't film the underwater scenes as these (except for the laughable sex scene) are some of the better portions.  He did film much of the helicopter footage as well as the morgue scene, which are some of the parts of the film memorable for being halfway decent.  He also met Lance Henriksen while working on the film which was fortuitous, as he would later cast him as the android Bishop in Aliens.
As for the rest of the movie, it is passable, but barely so.  Assonitis should have just let Cameron continue as, other than the underwater scenes, he doesn't seem to have much of a knack despite all the movies he may have under his belt.  Rather than do a humorous Jaws knockoff like the original did he just does the typical '80s Italian hack job.  The only other thing notable is the soundtrack, which is one of the first things (other than some bad dubbing) that tipped me off that this was going to be something along the lines of Troll II.
Piranha II: The Spawning (1981)
Time: 94 minutes
Starring: Tricia O'Neill, Steve Marachuk, Lance Henriksen
Directors: James Cameron, Ovidio G. Assonitis