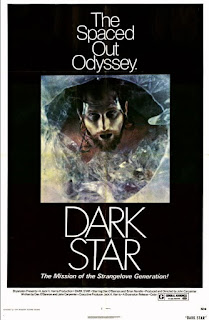 The problem with expanding on a student film to make it watchable for a general audience is not just budget, but often getting rid of certain pretentions.  Luckily John Carpenter didn't have that worry; Dark Star was his student film, made with a number of his friends and cowritten with Dan O'Bannon, who famously would go on to write the script for Alien after Alejandro Jodorowsky's attempt to bring Dune to the big screen failed.
Carpenter, rather than making an experimental film with poetry readings and a heavy dose of "meaning" went ahead and made a goofy science fiction film.  As can be imagined this was difficult with the budget he had, but he managed to repurpose children's astronaut costumes, household items and actual trash to build sets as well as dress his characters.  He combines ideas from a myriad of science fiction authors, from Ray Bradbury to Philip K. Dick, with enough new material to make it work.  His goal was to make a great student film.  Jack H. Harris, the producer, figured he had something, and convinced Carpenter to expand the movie to feature length, with a result that Carpenter was never really happy with.  Despite that it still managed to gather a cult following.
The Dark Star is 20 years into its mission.  The ship is falling apart, a situation that has resulted in the death of Commander Powell (Joe Saunders), leaving Lt. Doolittle (Brian Narelle) in charge.  The rest of the crew consists of Talby (Dre Palich), who has taken to isolating himself in the ship's observation dome; Boiler (Cal Kuniholm), who is bored and itching to shoot things; and Pinback (Dan O'Bannon), who ended up on the mission by mistake.  Their job is to destroy unstable planets to prevent them from spiraling into their suns and causing a possible supernova, thus making areas of space safe or colonization.
After two decades the crew is more than a little fed up with each other.  Add an obstinate, sentient bomb and an alien that looks like a giant beachball, and it all leads to things coming to a head after an electromagnetic asteroid storm does major damage to the ship.
There is not really a major plot to the movie other than to show the effects of sticking a small crew into a cramped space for decades.  Everyone on board Dark Star is insane in their own way, with Talby doing the smart thing of just getting out of the way of everyone unless he is needed.  While the crew control certain aspects of the mission, largely their job is to maintain the ship - something they are terrible at, as the ship's computer keeps reminding them.  Instead of a routine story we are shown various scenes of the crew interacting, the deterioration of the Dark Star and how events lead up to the final days of their mission.
This includes a long sequence where Pinback is tasked with feeding the alien, which leads to its escape and Pinback barely surviving an involuntary ride on the ship's elevator.  While there were a number of other movies that influenced the idea of Alien, this is often looked at as the germ of the idea, although here it is played, successfully, as slapstick comedy.  The original cut of the film ran just over an hour, so the opening and ending sequences, the conversation with Bomb 20 to try to convince it (through philosophy) to disarm and the alien sequence were largely the focus.  The theatrical version has Doolittle playing on his homemade musical instrument, some interaction in the crew quarters and scenes of the actual meteor storm.
While the special effects are nothing spectacular O'Bannon and his crew managed to at least make this look close enough to the original Star Trek series, using many of the same methods, plus a number of beautiful matte paintings by Jim Danforth.  If anything, Carpenter's ability to do quite a bit with little money would serve him well, up to and including his breakthrough hit Halloween.  And, like most of his movies, he did the music, adding foreboding synth tunes when needed and a bouncy country song called "Benson, Arizona" for other parts - including the ending, which has echoes of Dr. Strangelove or: How I Learned to Stop Worrying and Love the Bomb, combined with dialogue from Ray Bradbury's short story "Kaleidoscope".
While it may be a bit too light for some, Dark Star is a wonderful tribute to science fiction by lovers of the genre, and while John Carpenter isn't the happiest with what got released in the theater, it is still quite a bit ahead of a number of directorial debuts.  It has managed to hold enough interest, both through its humor and its intelligence, to where it connects to audiences to this day.  The line delivery at times is a bit amateurish, and the budget definitely shows in a lot of places, but it also proves what someone can do with good ideas and some ingenuity.  Also, nothing here looks anywhere near as bad as the surfing scene in Escape from L.A., and I'm sure Carpenter would rather be remembered for Dark Star than that.
After all, the movie did get a street named after it in Benson, Arizona.
Dark Star (1974)
Time: 83 minutes
Starring: Dan O'Bannon, Dre Pahich, Brian Narelle, Cal Kuniholm
Director: John Carpenter