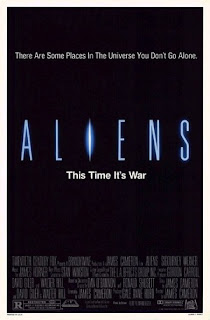 Maybe it should not come as a surprise that John Cameron's two most well-regarded films are sequels.  After all, he did start off with Piranha 2: The Spawning.  He was still relatively unknown when Aliens was released, as his original film Terminator had yet to be released, but it was this and Terminator 2 that sealed his reputation.

It helps in large part that Cameron didn't go the route many sequels in the 1980s, and even today, go.  Many times franchises kept being the same movie over and over again, often times heading for New York or space when they truly ran out of ideas.  The original Alien was already a horror movie in space, and largely traded on atmosphere to overcome its low budget.  It bucked a trend in science fiction films, where most were trying to rip off Star Wars at the time.  No cute kids, no cute robots, just a run-down freighter with an acid-blooded predator with a drive to reproduce.

Alien ended with Ellen Ripley (Sigourney Weaver) blasting the creature into space and putting herself into cryogenic sleep in the ship's escape pod.  57 years later her pod is found by a salvaging crew, who is surprised to find that she (and her cat) are still alive after all this time.  After recovering, she is given a low-level worker position on a space station in Earth orbit, and intends to live out her life low-key since the Company seemed to care less about her report of the alien creature that took out the crew of her ship.

They begin to care a bit more, however, when their colony at LV-246, the new designation for the moon where the alien eggs were found, suddenly goes dark.  She is asked by company executive Burke (Paul Reiser) to accompany a military operation to investigate what has happened.  Reluctant at first, she agrees, and finds herself the odd woman out with a squad of marines who have been together through a number of operations.  As usual, there are complications.  While the squad is well-trained, Lieutenant Gorman (William Hope) has never done a ground operation, and the ship includes an android named Bishop (Lance Henriksen), whom Ripley immediately distrusts due to the android on the Nostromo malfunctioning and attempting to kill the crew.

When they reach the colony, they find the colonists missing and the aftermath of a battle.  The only survivor appears to be a girl named Newt (Carrie Henn), whom Ripley befriends.  Burke quickly becomes excited by the discovery that the colonists had preserved face-huggers, the alien stage that implants embryos into a host, and plans, despite Ripley's objections, to bring them back to Earth for study. Meanwhile, the apparently abandoned colony reveals itself to be, in fact, infested with the mature alien forms as well as a nest of eggs located in the nuclear reactor of the colony's terraforming tower.  The nest has led to instabilities in the core temperature, giving the marines limited time before it explodes.

The crew attempts to leave, but an alien attack on their lander and from the rest of the aliens leaves only Private Hudson (Bill Paxton) and Corporal Hicks (Michael Biehn) to defend them against the onslaught while Ripley and Newt try to survive.  Meanwhile, Burke will do anything to obtain the alien organism, while Bishop labors to get a communication array functional to bring down their ship's other lander.  Of course, they also have to deal with that angry alien queen sitting at the heart of the nest, who is not going to give up without a fight of her own.

While the original Alien was at heart a horror film, director John Cameron was right not to retread that territory.  Aliens is an action film, and it has had quite a bit of influence on films (and video games) that have come after it, largely in its portrayal of a future military force.  It may be hundreds of years in the future, but the equipment used by the marines in Aliens is more realistic than laser guns, photon torpedoes and the like.  The performances are great throughout, although Michael Biehn's constant freaking out can get on the nerves - although it is meant to do so, since it has that effect on his squadmates.  Paul Reiser, largely known as a comedian, is such a convincing slimeball that it is said his own wife hit him when she saw some of the actions of Burke on screen.

And let's not forget Lance Henriksen.  He was about to give up on acting, and his role of Bishop jump-started his entire career, leading to character and lead roles in numerous science fiction and horror films, as well as the X-Files spinoff Millenium.

As for everything else, the movie is fantastic to look at even after 30 years.  Some of the older green-screen techniques are noticeable, but the sets are still outstanding, considering most of the exterior shots were miniatures.  Not surprising, since when producers first saw some production footage, they were convincing enough to cause concern that Cameron had blown his money on an elaborate set and might be heading the studio into a boondoggle. Occasionally there are some acting quirks, but this has rightfully earned its place as one of the best science fiction movies of all time.

Unfortunately, the boondoggles arrived in droves as the franchise went on.  Aliens, three decades after its release, still remains the last good movie of the series, despite two more direct sequels, three movies with the aliens battling the Predator species and a prequel of sorts with Prometheus.  There is more on the way as well, but so far the combination of detail, great storytelling and an engaging cast that made Aliens so successful has continued to evade those wishing to carry on the story.