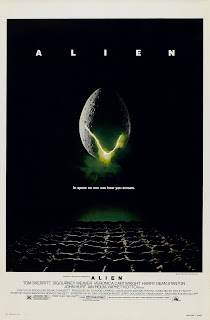 Alien most certainly didn't develop in a bubble.  Dan O'Bannon had written a treatment for the movie after teaming with director John Carpenter for the latter's feature film debut Dark Star, which included a small beachball like alien that caused comic havoc aboard a space ship.  He had spent the few years afterward working on Alejandro Jodorowski's unproduced version of Dune, and there was definitely an influence of both haunted house films and old '50s b-movies such as It! The Terror from Beyond Space, of which Alien has more than a little in common.
Still, without the involvement of cowriter Ronald Shusett and director Ridley Scott, all these different elements would never have come together to make the movie what it is.  Alien had its influences, but it was a fresh take on a science fiction tale, doing away with the cute robots and fantasy action of Star Wars and pondering such elements as hostile first contact and corporate greed.  Meanwhile, O'Bannon's contacts during the failed production of Dune paid off, as Swiss surrealist artist H.R. Giger was brought in to contribute to set and creature design, and different tweaks and twists to O'Bannon's script by Scott and others gave us what turned out to be one of the biggest science fiction franchises.
While heading back to Earth the crew of the Nostromo, a towing vehicle transporting a mineral refinery and a few tons of ore, is suddenly awakened in what is seemingly the middle of nowhere.  The ship's computer, Mother, has detected a beacon that may be a distress call from an unknown intelligence, and following protocol the team must investigate it.  This does not sit well with the blue collar engineers, Parker (Yaphet Kotto) and Brett (Harry Dean Stanton), but science officer Ash (Ian Holm) insists.  Landing on the moon the signal is coming from damages the ship, and while repairs are done the ship's captain Dallas (Tom Skerritt), and two of his officers, Kane (John Hurt) and Lambert (Veronica Cartwright) seek the source of the signal, while third officer Ripley (Sigourney Weaver) remains on board to supervise the repairs.
What they find is a crashed alien ship with a giant dead pilot and a chamber below full of eggs.  When Kane examines one it opens up and a creature attaches itself to his face.  It dies while the other members of the crew try to figure out how to get it off, with Kane soon waking up but then giving birth to a creature that hatches out of him.  The creature begins to grow to greater size, stalking the the members of the crew while Ripley and Dallas try to figure out how to get rid of it.  Unfortunately, the company they work for has been keeping some secrets from them, and the alien isn't the only enemy they have on board.
I would hazard that after all these years that a number of people are more familiar with the action-packed sequel, Aliens, than they are the first one.  Alien is a completely different creature, meant to be a tense suspense thriller happening in space instead of an old house or cabin.  It definitely works, with Scott wisely using the creature (played by Bolaji Badejo) sparingly.  He had to compromise for a man in a suit due to budget and technological limitations of the time, but made sure that he used lighting and different angles to hide the fact as much as possible.  It helps that H.R. Giger's creature design, based on a series of phallic bio-mechanical paintings he had done, keeps the eyes busy wondering where to look.  Alien is as much about atmosphere as it is about grand questions, and it indeed helped to inject some seriousness back into science fiction at the time.
The other thing it did, inadvertently, was give us one of the best female leads.  Dan O'Bannon and Ronald Shussett specifically wrote the script so that the characters could be any gender, with the only caveat that the facehugger victim had to be a man so it didn't seem like the usual plot of a woman being victimized.  Since the characters were written as equals they are largely played as such, even though Lambert ends up being more of the typical hysterical damsel in distress.  Ripley is the one everyone should have listened to, as everyone except Kane would have survived and the baby alien would have ended up in space instead of on the ship.  Though it was obvious she was a much different female character than had been on screen in the past, particularly in science fiction or horror films, it developed organically and set the tone for future movies where the female protagonist would be more than a victim or a final girl.
The rest of the cast, though not as immediately dynamic as Ripley, realistically portrays a group of blue collar workers doing a routine job in a futuristic setting.  That they, except for Ash, are regular people just hoping to be paid at the journey's end, connects them more with the audience.  As usual with Ridley Scott films that doesn't mean many of them are developed too far, but the Nostromo feels like one would think a real ship in the future, when space travel is routine business, would be like.  As much as I like the atmosphere I still like the second better as Ripley, and the world she is in, is developed further (and better) by James Cameron.  Still, even though this generated its own bunch of knock-offs just like Star Wars did (many of the knock-offs being better than the third movie and those beyond it), it still feels fresh and strange after all this time.
Alien (1979)
Time: 117 minutes
Starring: Sigourney Weaver, Tom Skerritt, John Hurt, Yaphet Kotto, Ian Holm, Veronica Cartwright, Harry Dean Stanton, Bolaji Badejo
Director: Ridley Scott