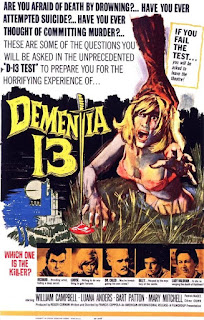 Francis Ford Coppola, like many directors of the "New American" cinema wave that took over Hollywood in the 1970s and 1980s, began working with Roger Corman.  Corman famously made movies as quickly, and cheaply, as possible, producing and directing scores of films from the 1950s up to the present day.  In many cases, if there was extra time or money, he would hand things off to one of the people working with him to go make their own film.
Such was the case with Coppola in 1963.  Corman was making his own movie, The Young Racers, in Ireland.  Not one to waste a trip, he lent some of his cast and crew and gave Coppola time in between working on The Young Racers to make Dementia 13.  Also in typical Corman fashion the 13 meant nothing; Coppola's script was called Dementia, and 13 sounded scary, and it made sure his movie didn't get confused with another movie of the same title.
Brothers John (Peter Read), Richard (William Campbell) and Billy Halloran (Bart Patton) have come home to their ancestral castle to join their mother (Eithne Dunn) in an annual graveside ceremony commemorating their young sister Kathleen (Barbara Dowling) who drowned in a pond on the property.  Along with them are John's wife Louise (Luana Anders) and Richard's fiancé Kane (Mary Mitchel).
Louise is quite upset about Lady Halloran changing her will to where it will go to charity and sees an opportunity to do something about it when John suddenly dies of a heart attack.  Disposing of his body in a lake, she fakes a letter saying he is returning to the United States and then works out a plan to make Lady Halloran believe that Kathleen is communicating with her.  While the ghost may be Louise's doing it soon becomes evident that there is a killer on the premises, and Dr. Caleb (Patrick Magee), the family's physician, hopes to draw him out.
For those looking for any of Coppola's later style of film making, including anything that would even connect with classics like The Godfather or Apocalypse Now, there is almost nothing of that later film maker who would become one of the most important directors of the 1970s.  Maybe a few of the fades are similar, but this is strictly a 1960s horror mashup of Hammer, Mario Bava and the style of Corman's Edgar Allen Poe films.  Also, even most unlike later Coppola, the film was done on time and within budget.
While this is officially his first film he had made a movie that was just barely feature length - Tonight for Sure! - that was part of the old-fashioned "nudie" genre that started popping up as the Hays Code relaxed.  So, there is a bit of a technicality, but I can understand why Coppola would want people to watch Dementia 13 instead.  It's not a great movie by any standard, and it is definitely not original in its plot, but it does have a few scenes where it pushes the envelope at the time as well as some elements that subvert the viewer's expectations.  Unfortunately, it is also filled with actual plot holes rather than what many people think are plot holes these days - one major one being at least one body that should be in the pond which is significantly absent when it is drained.  The killer isn't too much of a secret from the get-go and, though they are all supposed to be Irish, not one of the brothers have an accent.
William Campbell and Luana Anders are kind of the leads, although they don't interact much.  Campbell plays a brooding artist, while Anders is pretty good as the greedy daughter-in-law.  Patrick Magee is perhaps the biggest name here and he chews the scenery when he can, obviously enjoying his role.  Coppola, to his credit, does quite a bit of location and outdoor filming, and doesn't use the day-for-night trick.  In fact, at the beginning, he uses the night time to his advantage, lighting only a pier and the boat and leaving the water completely black.
Dementia 13 is a quick film, meant to be a b-feature but managing to be slightly better than most of them.  It at least gave Coppola the start of working on a real film, which is probably why he considers this his debut.  The experience from making this carried over into his next few films as he developed his style and ultimately earned a place in cinematic history.
Dementia 13 (1963)
Time: 75 minutes
Starring: William Campbell, Luana Anders, Bart Patton, Patrick Magee, Eithne Dunn
Director: Francis Ford Coppola