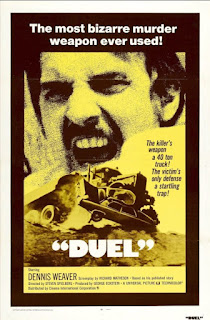 When starting out it is a good idea to take advantage of any opportunity.  This was especially true for Steven Spielberg in 1971.  He had wanted to break into movies for all his young life and television was the stepping stone.  Although not a big screen film, he was offered the chance to direct a version of Richard Matheson's short story Duel, about a businessman menaced by a truck driver on the open highway.  It's simple, it's a situation that can be universally nerve wracking, and best of all it can be done, and done well, without having to go all out on the budget.
Dennis Weaver may not be that well-known now, but at the time he was just seven years off of one of the longest running televisions shows, Gunsmoke, and he still played a number of television and small film roles.  It was also the same time another movie about regaining one's masculinity, Straw Dogs, was a major (if controversial) box office hit.  Carsploitation movies were also blowing up thanks to Bullitt and The French Connection, so a movie that boiled down to just a long car chase was certainly going to get attention.
David Mann (Weaver) is on a business trip from Los Angeles to an unknown destination in California.  At one point he encounters a beat-up tanker truck traveling slowly in front of him and passes it, not thinking much about it.  The truck then speeds up to overtake him before again slowing down.  After a few attempts to get by him, the trucker escalates his tactics and it becomes quite clear that whoever is in the tanker means to kill him.  Unfortunately anyone he encounters tends not to believe him, leaving Mann to deal with the situation himself.
The original version of the movie was made for television, and I know it's going to sound strange for anyone who sees it now, since there are references to rape and some mild profanity.  These are, however, scenes that were filmed later when the movie became popular enough to get a theatrical release in Europe.  Needing to extend it to 90 minutes the opening drive at the beginning was added along with a scene of Mann having an argument with his wife over the phone and being taunted by school children as he attempts to help a stranded bus driver.
The rest of the movie is what was shown in the original broadcast, featuring Weaver and a never-revealed truck driver along with a few extras that appear in minor roles here and there.  Weaver did a large part of his own driving, while not allowing the driver of the truck to be seen made the giant, rusty behemoth a character of its own, as intended.  Duel was done on extremely low budget it was filmed largely on deserted roads with the assistance of the camera car that was made for Bullitt, and the whole premise allows for few actors and a stunt crew.
What may surprise most audiences today is how good the final product actually is.  Though he had major success with Jaws and Close Encounters of the Third Kind, the 1970s was still a formative time for Spielberg, as he still had two more television movies that were nowhere near as successful as Duel as well as unmitigated box office flops in The Sugarland Express and 1941.  He certainly had his stumbles on becoming one of the biggest creative forces of the 1980s, but he also had some experience making short films before this and definitely had his influences.  This all works to his advantage.  There are errors, and sometimes where crew is seen, but largely he pulled off what was his first major project.
As for the actual movie itself I am quite sure that George Miller had sat down and watched this more than once.  I can see the influence to the first two Mad Max films films writ large here, especially the low tracking shots of the truck.  Weaver was a good choice, looking ordinary enough and having the acting experience to pull off a film which is basically just him and his internal monologue.  I do think that the voiceover narration of his thoughts didn't always work, but it is still better than him speaking narration out loud just for the audience's benefit.  We are given enough to know that he has not lived up to his expected masculine role, and that his encounter on the road is a chance test to give him back his manhood.  Also to Spielberg's credit one of the tensest scenes occurs not on the road but in a diner as Mann makes patrons uncomfortable as he scans them for signs that any one of them may be the trucker that's been harassing him.
Duel may be Spielberg's official featured debut, although at 18 he had his amateur film Firelight screened at Phoenix Little Theater.  I wouldn't say he is fully formed here, but much of what would make him a successful director is already here, which is rare.  There's a care and a respect for the movies that influenced it and, though Spielberg himself has said he kind of chafed at the time having to do television, he still gave it his all.
Duel (1971)
Time: 90 minutes
Starring: Dennis Weaver
Director: Steven Spielberg