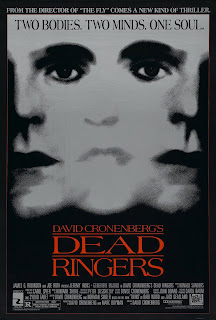 David Cronenberg in the 1980s was known primarily as a director of horror films.  He had grown from writing and directing bloody, overtly sexual body horror on the cheap (and with a bit of help from the Canadian government, which caused controversy at times) to sneaking his way into mainstream theaters in the U.S..  With his adaptation of Stephen King's The Dead Zone and a remake of the 1950s creature feature The Fly, Cronenberg managed keep his horror credentials while expanding his audience.
The Dead Zone had already seen Cronenberg successfully melding drama along with horror, and it was obvious by the late 1980s that he wanted to do something new.  The idea of a movie about twin gynecologists with questionable ethics, given the content of many of his early films, would make one think that he would be pushing the envelope further than ever before.  Instead, what Cronenberg delivered was a slow-burning examination of co-dependency and loneliness.
Elliot and Beverly Mantle (Jeremy Irons, in both roles) are identical twins who have been interested in medical practice, specifically gynecology, since they were young boys.  Having won early awards for their research, and invention of surgical tools, while in college, they have set up a successful practice in Toronto.  Beverly does the hands-on work, with examinations and surgeries, while Elliot handles the public relations side.  No one can tell them apart, so Elliot uses that to get his brother some action now and then, with the two of them often sharing the same girlfriend.
One of those women is actress Claire Lieveau (Genevieve Bujold), who initially comes to their clinic to find out if they are able to help her get pregnant.  It turns out a rare mutation prevents this, but after being seduced by Elliot she starts seeing Beverly before realizing they are twins.  Initially angry, she continues the relationship, which initially causes problems between Beverly and Elliot as they usually share everything.  Unfortunately, Claire has another effect on Beverly, resulting in him becoming hooked on pills and soon moving to other drugs.  With Beverly's behavior becoming erratic and a being a danger to patients, Elliot tries to break his brother's habits, but soon finds himself trapped by his own need to share in every experience.
I guess it has to be said, although Cronenberg's fans bent over backwards trying to convince themselves at the time that it was, and often still do, but Dead Ringers is not a horror film.  There is a typical Cronenberg scene in a dream sequence and the ending is quite disturbing, although he is more than happy to have the audience dwell on the implications rather than the sight of what happened.  This is a straight drama, albeit a psychological one, that is closer in style to European films, but with that focus on plot that Canadian and American films typically have.  Jeremy Irons gives one of his best performances as the twins, giving each one a markedly different personality, although still managing to confuse the viewer when one or the other is putting forth the effort to do that with others.  Genevieve Bujold is also great as an actress who has been through quite a lot and is accepting of almost anything, except being screwed around with.
The main point, however, is that they are all lonely.  The Mantles may have each other and their success, but as individuals they are quite isolated, and without the other a bit of them dies.  Claire's need for having a baby being less about bringing a life into the world and more about possibly having one other person to share her own life.  She, at least, is accepting of the fact, while it isn't until near the end that Elliot starts to realize how self-destructive their fraternal relationship is.
Despite not being a horror film it is still uncomfortable to watch, largely as Beverly falls further and further into addiction and loses everything that made him a separate individual from his brother.  As can be expected Cronenberg doesn't pull any punches when it comes to this, even if the ending is a bit contrived in order to wrap things up.  It is still a harrowing experience, just not the type one would expect after a string of movies that featured parasites and lots of blood and slime, although it could be said that the twins carry on the Cronenberg parasite tradition, but in quite a different way.
Dead Ringers (1988)
Time: 116 minutes
Starring: Jeremy Irons, Genevieve Bujold
Director: David Cronenberg