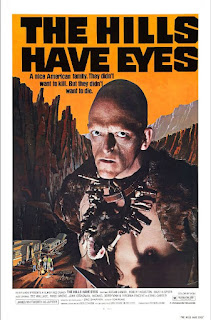 Although Tobe Hooper saw little of it because, like a number of exploitation films in the 1970s, the mafia got involved with the distribution, The Texas Chain Saw Massacre was a huge hit.  There was more than a little of the old Scottish legend of Sawney Bean, a highway robber who supplied meat to his family through cannibalism, in it as well.  While The Last House on the Left may have a cult following now, Wes Craven's debut feature film did not exactly make him rich and, after making a pornographic drama about incest called The Fireworks Girl under a pseudonym, Craven found himself in debt and without anyone seriously looking at his scripts.  Producer Peter Locke suggested that, instead of trying to push turgid romance stories, he return to what he was good at.
The Hills Have Eyes was originally supposed to be more of a violent science fiction film, taking place in the year 1994 in a forest full of cannibals.  While Locke was able to secure a nice budget for him, nothing came close to being able to do sci-fi, so he went for straight horror out in the middle of the desert while still keeping some of the themes about radioactive mutation.  Although filmed in Apple Valley, California, the movie itself is supposed to take place in rural Nevada, near an Airforce bombing range and downwind from where the nuclear bombs were tested up until the 1960s.  Combining his love for Hooper's film, his own research into the Sawney Bean story as well his conservative Christian upbringing, Craven came up with a horror film that still manages to stand out despite its obvious pedigree.
Big Bob Carter (Russ Grieve) and his wife Ethel (Virginia Vincent) are on their way from Ohio to California during their 25th wedding anniversary.  Bob is a retired Cleveland police officer, and along with them are his son Bob (Robert Houston), daughters Brenda (Susan Lanier) and Lynne (Dee Wallace), Lynne's husband Doug (Martin Speer) and their baby Catherine.  Despite the warning of a gas station attendant named Fred (John Steadman), the Carters take a detour to search for a silver mine they've been given as an anniversary gift.
The reason for Fred's warning is he knows what waits for them out in the desert: Papa Jupiter (James Whitmore) and his family.  When the Carters get stuck out on a dirt road near their encampment, Jupiter's sons Mars (Lance Gordon) and Pluto (Michael Berryman) set their sights on plundering the trailer and murdering the family.  Unfortunately for them the Carters, though the odds and terrain are against them, do not give up easily.
That is the main thing that differentiates The Hills Have Eyes from The Texas Chain Saw Massacre.  Although the Sawney Bean story is thought to have either been pure folklore or an incident that was exaggerated over the years, it always ends with the family's capture, torture and execution, all the way down to the young children.  The brutality visited upon them by the authorities is the equal to that of which they treated their victims.  Not only does Craven present us with an off-the-grid family existing in an almost animalistic fashion, but he aimed to show how a normal, white-bred American family can quickly turn when faced with such dangers.  It is refreshingly free of any speeches about "acting like a man" or such, but shows both Doug and Bob - and Brenda as well - quickly come to the conclusion that the only way out is to fight back without reservation.
What Craven does best is ratchet up the tension, since there are so many cinematic rules that are broken, even for an exploitation film, that the viewer doesn't know what is going to happen until the end comes.  When it does, it comes abruptly.  It's a rather controversial decision, even more so than any of the others, because even though nothing in the movie sets up for a traditional Hollywood finale, one wouldn't be amiss to thinking it would have something that tied up the loose ends.  Despite its abruptness I would say the ending is still effective and drives home Craven's point, particularly since the 2006 remake went for a more traditional horror film ending which had nowhere near the impact.
The acting is mixed, but much better than one would expect from a film like this.  Obviously Dee Wallace, who makes her debut in this movie, was the one lead actor to come out of this film, although Michael Berryman has had a long and continuing career as a character actor and, despite his unique appearance, has had a wider variety of roles than Wallace has.
The other takeaway is that The Hills Have Eyes, unlike The Last House on the Left, actually feels like a real movie with a director who has a certain sense of style.  Except for one scene The Last House on the Left is as artless as can be, which in some ways adds a sense of reality to the proceedings, but really just makes Craven look like someone who has no idea how to even frame a shot.  Either that was on purpose or Craven took some time to learn his craft for this one.  While not as disturbing as his previous film, The Hills Have Eyes does work better when it comes to building suspense, and gave us one of the best horror films of the 1970s.
The Hills Have Eyes (1977)
Time: 90 minutes
Starring: Robert Houston, Susan Lanier, Martin Speer, Dee Wallace, Russ Grieve, Virginia Vincent, James Whitmore, Michael Berryman, Janus Blythe
Director: Wes Craven