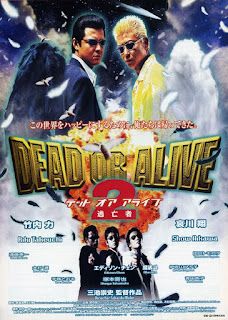 Director Takashi Miike stretched his original Dead or Alive into a trilogy, although it's not an ongoing story but rather three films somewhat based on the theme of the title.  Other than Miike, the main connection is its leads, Riki Takeuchi and Shô Aikawa, although they also play different roles in each movie.  The other connection is that they all take place at least partially in Yokohama.  The different films are also quite strange thematically, often feeling like multiple movies combined into one.
Mizuki Okamoto (Aikawa) is tasked by a magician (Edison Chen) who is working with a small organized crime outfit to assassinate a yakuza boss in order to start a gang war between them and the triads.  While doing so another assassin (Takeuchi) shows up and kills the boss and his entourage before escaping.  The news reports the assassin with Mizuki's name, but Okamoto recognizes him as Shûichi, a boy he was best friends with when they were both in an orphanage on a small island village.  Mizuki takes the money anyway and, when the gang starts demanding it back, leaves for the island, and soon discovers that Shûichi has decided to do the same thing to lay low.
After reuniting they contact another friend, Kohei (Ken'ichi Endô), who has remained on the island as a fisherman and married Chieko (Noriko Aota), a girl who was also friends with them at the orphanage.  During the time on the island both Mizuki and Shûichi begin to contemplate their lives and, though they decide to return to their chosen profession, they decide to work together and donate the money to needy children around the world.
One of the big differences between Dead or Alive and Dead or Alive 2 is that Miike doesn't seem out to push the envelopes as much.  That doesn't mean that this is a family-friendly film.  The escalating gang war is juxtaposed with Mizuki and Shûichi helping to put on a children's play for the village.  The ensuing melee includes a pixilated three-foot long penis belonging to one of the gang members as well as a hooker being violated after her john is shot while in the act with her.  It's nothing like the kiddie pool scene in the first one, or even like the first eight minutes of the original, but that edge is still there.  In this case it does serve more than just a means to shock, but to further the narrative of the two hitmen coming to grips with where they came from and where their lives have led them.
This is a frequent theme throughout as title cards, in English, repeatedly ask, "Where are you?" at different points in the story.  The constant bird imagery, with Mizuki toward the beginning in bright colors and frosted blonde tips in his hair seemingly sitting and squatting on perches as he speaks with others, increases throughout as they rediscover who they are and free themselves from what they have become, ultimately transforming themselves into people they can be proud of before they die.
That, ultimately, brings up the topic of the name of the series.  Dead or Alive is about as generic an action movie title as one can get and, rather than being translated from Japanese, the title is specifically in English.  In the first movie, when the two leads confront each other, long after they both should be dead they suddenly confront each other with a bazooka and an energy ball, with their final attempts to kill each other resulting in the destruction of the Earth.  The world in which the two live, with Jojima's isolation from both his family and his peers and Ryuichi's isolation due to his heritage making him an outsider, can have multiple meanings on the question of whether they are symbolically dead in every way except physically.  It is also a hellish vision of Tokyo, filled with muck and rain and garbage, both literal and human, as well as a sense of constant loss.
This time around we are given a glimpse of paradise in which our characters regain their love for the world, even if they must accept their place in it and the fact that, if their Roman Catholic upbringing is correct, they may both be in for a rough eternity.  The constant question of "Where are you?", and the final variation on that, could just as well be asking if one is dead or alive emotionally or spiritually.  Given the fantasy elements in both, if they are to be taken literally rather than figuratively, the question could even be more literal, as it is possible in both movies that the characters are experiencing their own afterlives.
In contrast to the deliberate assault on the senses that has made Dead or Alive a cult film, I find Dead or Alive 2: Birds to be much more satisfying as a movie.  It may be strange, and even confusing at times, and still repulsive in that unique way that Miike and frequent collaborator Masa Nakamura can be.  However, when taken as a whole, it makes the statement it wants to make much louder than the glaring visuals of the first.
Dead or Alive 2: Birds (2000)
Time: 97 minutes
Starring: Shô Aikawa, Riki Takeuchi, Ken'ichi Endô, Noriko Aota
Director: Takashi Miike