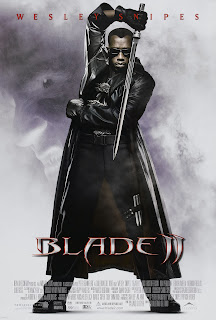 Since Blade himself, though not Wesley Snipes, is returning to the Marvel Universe, I decided to see how the original Blade held up as it did develop a bit of a following as time went on.  For me, other than Snipes embodying the Daywalker and Kris Kristofferson playing a great supporting role as Whistler, it didn't.  It really wasn't that good when it first came out, with effects that often look like someone playing with blobs of mud.  It being 1998 doesn't even count as an excuse, because there were similarly budgeted films from the time that look much better.  It was largely a hollow, uninteresting action film with vampires thrown in.
Truth is, I didn't see Blade first.  I purposely gave it a miss because the previews looked pretty much like what the movie was.  I never really even meant to see Blade II, and I honestly can't really think of the reason why I originally saw it.  I didn't know Guillermo del Toro - who I knew at the time from Cronos and Mimic - had directed it until I saw his name in the credits, and so had no real idea of what was to come, other than I was afraid it was going to be dull and predictable.  What does come is the reason that Blade, even if it had been a better movie, was ultimately going to be a disappointment but any standard, since del Toro, though being pretty much a director for hire this time around, was able to make a much better film than Stephen Norrington's original.
Two years after the events in Blade our hero has arrived in the Czech Republic looking for Whistler (Kristofferson).  Turns out Whistler didn't die, but shot himself while he was already turning.  He survived, was captured by the Vampire Council and moved around to keep from falling into Blade's hands.  Finally reunited, Blade uses the vampire cure developed in the first movie to bring Whistler back, who is unhappy to find out how much time has passed.  He also immediately clashes with Blade's new sidekick, Scud (Norman Reedus).
That reunion is cut short when Nyssa (Leonor Varela) and Asad (Danny John-Jules), two vampires sent to find Blade, arrive and offer him a truce.  It seems a new threat has arrived in the form of creatures called Reapers, led by a man named Nomak (Luke Goss), and which feeds on vampires, in turn making them Reapers as well.  Blade agrees to help a special unit called the Bloodpack, led by neo-Nazi vampire Reinhardt (Ron Pearlman), to help hunt the creatures down.  Unfortunately, the creatures seems to have multiplied much beyond the control of the vampires, and the Council's Overlord Damaskinos (Thomas Kretschmann) may not be telling all he knows.
The plot is as thin as it can be, as wisely del Toro and screenwriter David S. Goyer concentrate on the action.  Donnie Yen, who also plays Snowball, one of the members of the Bloodpack, worked on much of the fight choreography, although Snipes contributed a good deal as well.  There are many more fights this time around, and a lot of it looks better that the first film, especially when it comes to the vampires dying after being staked or shot with silver.
The big effect is the Reapers, with a jaw that opens at the bottom, stingers to paralyze victims and a tongue that is used to transfer the virus as well as feed.  It's a combination of practical and CGI effects, and it is quite well done, even if this whole design has been overused in the last two decades since this movie came out.  The whole path the Reaper plot takes is as predictable as can be, but at least del Toro's direction and Snipes's portrayal of Blade keep things on track.
Unfortunately, the writing is where this movie falters.  In Blade Stephen Norrington did such a bad job with directing the film and his crew such a horrible job with the effects that it distracted from David S. Goyer's writing.  Here, with those problems fixed, that is what stands out.  Reportedly del Toro wasn't too impressed with it either but, after finding out arguing was useless, pretty much made the movie Goyer wanted.  The big problem is that every twist and turn is predictable, Kristofferson is back but Whistler isn't given as much to do as before, and thought Leonor Varela is nice to look at I get the feeling that her character was intended to be more than just a love interest.  It robs the final scenes of the movie of much of the emotion heft it should have.
Blade II is unquestioningly the best movie in the series, with effects and fights that match what the character is supposed to be and, most importantly, having Wesley Snipes's full engagement in the film.  Even more important is that, although he had little to do beyond directing the movie, it made a nice profit and elevated del Toro from being a niche foreign horror director to being someone Hollywood was willing to take a chance on, to the tune of greenlighting Hellboy as his next film.
Blade II (2002)
Time: 117 minutes
Starring: Wesley Snipes, Kris Kristofferson, Norman Reedus, Leonor Varela, Ron Pearlman, Luke Goss, Thomas Kretschmann
Director: Guillermo del Toro