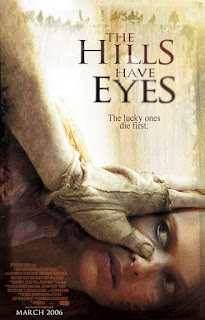 The Hills Have Eyes was one of a number of horror remakes that came out in the 2000s.  The difference between this and the slew of other money grabs was that Alexandre Aja already had an international horror hit with the interesting, if highly flawed, Haute tension.  Where many of the other movies had second-rate or unknown directors attached, this one had someone who truly liked the horror genre, and even seemed to have some love of exploitation films.  He also had the blessing of Wes Craven, who had written and directed the original The Hills Have Eyes in 1977.
Although there are definitely a number of changes, Aja was smart to leave most of the core story alone.  There is a little more explanation this time around, but nothing that takes up a good portion of the film or that truly undermines it like Rob Zombie's version of Halloween.  It just simply provides some backstory.  Aja understood the point Craven was making in his film, and just largely sought to update the story to the modern day.
Big Bob (Ted Levine) and Ethel Carter (Kathleen Quinlan) are celebrating their 25th wedding anniversary and Bob's retirement from the police force by moving to California.  Along with them are their two daughters, Lynn (Vinessa Shaw) and Brenda (Emilie de Ravin) and their son Bobby (Dan Byrd), as well as Lynn's husband Doug (Aaron Stanford) and their baby.  Rather than taking the straight route Big Bob has decided he wants to check out the backroads through the New Mexico desert.  When they stop at a lonesome gas station with a shady attendant (Tom Bower), he sends them off on a supposed shortcut to get back to the main highway.
Rather than a shortcut the road turns out to be a trap set up by a  band of cannibals that have had their children over time mutated by radiation from atomic bomb testing after their ancestors refused to leave the mining town they were raised in.  The Carters soon find themselves set upon by brothers Lizard (Robert Joy) and Pluto (Michael Bailey Smith), who steal baby Catherine after raping Brenda and killing several members of the family.  While Doug goes off on his own to save his baby, Bobby and Brenda hang back, hoping to take care of the band's leader.
I guess Alexandre Aja thought Morocco resembled the New Mexico desert close enough, but don't understand why it was based there.  Only some of the initial tests were done at White Sands, while the majority of the tests done on U.S. soil were in Nevada, hence the reason for the location of the original movie.  He also tries to make some of the cannibals more sympathetic, unlike in the first where Ruby was the only one with any moral sense.  Here Ruby (Laura Ortiz) still seems a bit different, but she's mute throughout and doesn't seem as intent on escape.
The acting is better than the original, even though Aja largely kept Craven's original script intact.  However, the opening scene does nothing to set up what's to come, and the band of cannibals itself is nowhere near as interesting as they were in the original.  Part of the appeal of Jupiter's family was, except for a few layers of dirt, they looked normal - except for Pluto (played by Michael Berryman in Craven's film), who showed some deformities.  In Aja's version almost all the bad guys are mutant monsters, and none of them with any standout personality no matter how good the combination of practical and CGI effects was in bringing them to life.  The effects themselves are great, largely because in many cases it's hard to tell they are even there.
When it comes to Doug, this time around he is trying his best to prove he is a man, when in the original a switch just flips when his child is kidnaped.  I think that is a mistake because, since Aja took pains to preserve much of Craven's film in his own, The Hills Have Eyes wasn't about proving one's self under pressure but was instead about how normal human beings can become as savage as those that prey upon them.  Some of that idea is still there, largely when Doug does take revenge, and in many ways the part where Doug takes the battle to the mutants is where the movie does get a bit better than the original.  The result is this version of The Hills Have Eyes is more violent and more bloody than the original.  In some movies that ruins what made the original good, but in this case it brings it closer to what Craven most likely wanted to do before he had to cut the film down to get an R rating.
I do think the abrupt ending, with Doug repeatedly stabbing Mars at the end of the original, is the better choice than the more traditional horror ending in Aja's version, but this was one of the few remakes from that time that had respect for the source material and, ultimately, had a point to existing.  Unfortunately it kind of stuck Aja with making remakes for awhile afterwards but, like this, they were at least still interesting and were true to their exploitation and horror roots.
The Hills Have Eyes (2006)
Time: 107 minutes
Starring: Ted Levine, Kathleen Quinlan, Dan Byrd, Emilie de Ravin, Aaron Stanford, Vinessa Shaw, Michael Bailey Smith, Robert Joy, Laura Ortiz
Director: Alexandre Aja