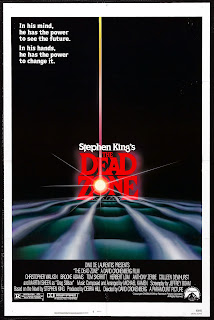 I have been a Stephen King fan for a long time.  However, I discovered him during the 1980s when he was writing epics like The Stand and It.  Of course I knew of the other books before those, and I think I started my King obsession with Pet Sematary, which is still one of my favorite of his earlier, pulp-style horror novels.  I had seen many of the movies based on the older books, but strangely did not dive into most of his '70s output until I was an adult.  An exception to that was The Dead Zone.
I don't remember when I first read it, but it has always been one of my favorites of that classic first run of King novels.  Carrie had a certain young rebel style, while 'Salem's Lot was a great horror tale, but The Dead Zone had a complexity to it that foreshadowed many of his later books.  It was as if King had something to prove at this point when it came to writing outside of straight horror.
Director David Cronenberg appears to have approached the movie adaptation of The Dead Zone in a similar manner.  His previous project, Videodrome, was the perfect example of what he was known for - horror movies that played on parasites, bodily deterioration and all sorts of different corruptions of the flesh.  There was an expectation for a Cronenberg film, just as there was for a King novel, and so the opportunity to adapt one of the author's more challenging stories came at an opportune time.
Johnny Smith (Christopher Walken) is an English teacher who is looking forward to settling down with his fiancé Sarah (Brooke Adams) and getting on with the best years of his life.  Unfortunately, a traffic accident leaves Johnny in a coma for five years, and when he wakes up he finds Sarah has moved on and that his life is forever changed.  With the help of Dr. Sam Weizak (Herbert Lom) he slowly recovers, but must also face another challenge: he suddenly has clairvoyant powers, able to see information about the past, present and future by engaging in physical contact with others.
The press soon finds out about his powers after his warning saves his nurse's daughter, but upon leaving the clinic he tries to keep a low profile.  This changes when Castle County Sheriff George Bannerman (Tom Skerritt) asks him to assist in a serial case, which he eventually does.  The fame from that case drives Johnny further into seclusion as he tries to get on with his life.  However, a chance encounter with a populist third-party Senate candidate named Greg Stillson (Martin Sheen) spurs Johnny into action when he realizes the fate of the whole world may be in his hands.
While it has supernatural elements The Dead Zone is not really a horror movie.  In fact, the book was not, either.  Although inspired by a real-life psychic (at least one that claimed to be), this is more of a character study of a man trying to find his place in the world and having to face some hard facts when he finds it.  Even early on, when asked to help with the murder investigation, the question posed is if someone actually did have the ability to make a major change in the world, then what would they do.
For those used to Christopher Walken playing a frightening character that is barely in control of himself it'll be a bit surprising that he could play someone as vulnerable a Johnny Smith.  Walken, like a lot of older actors, has kept his late career going by playing a certain type.  Earlier in his career his roles were much more diverse, and he brings a kindness to the character that could otherwise get lost in a movie as episodic as this one.
The supporting actors are quite fine as well, with Herbert Lom, best known for the Pink Panther comedies, playing a doctor who, playing against type of many such characters in Stephen King stories, truly has his patient's best interests at heart.  Brooke Adams, for the short time she is in the film, makes the lost romance she and Johnny had believable, and Martin Sheen plays a character a little too close to someone we all had to put up with recently.
Surprisingly, Cronenberg follows the book rather well, with one of the main deaths being actually toned down and, unfortunately, a lot of Stillson's background missing, even though that probably did help the flow of the movie in the end.  What is important is that it still flows in a similar matter and still ends in the same way - and, unlike a lot of current movies, it ends when it ends.
Since the story is about an everyman who ends up tasked with saving the world the story holds up rather well after all these years, as does Cronenberg's movie.  It's subtle, intense when it needs to be, and not afraid to slow down and give us a character we actually care about.
The Dead Zone (1983)
Time: 103 minutes
Starring: Christopher Walken, Brooke Adams, Herbert Lom, Martin Sheen, Tom Skerritt
Director: David Cronenberg