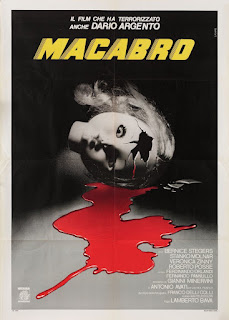 Lamberto Bava may have had a famous father, but he still came up through the ranks of Italian cinema doing work on scripts and as part of the crew.  He also helped direct films, even though that didn't necessarily mean his name would be on them.  He worked not only his father's films but also with other directors such as Ruggero Deodato and Dario Argento in the late 1970s.
By 1980 he was ready to fly the nest.  Fly he did, all the way to New Orleans, Louisiana, inspired by a newspaper clipping of a strange murder case.  Producer Pupi Avati offered Bava the privilege of making his first solo film and, although I typically find a lot of Lamberto Bava's films sloppy and poorly paced, Macabre is a good early effort where he concentrated on the story as well as on developing his own style rather than trying to imitate Argento.
Jane Baker (Bernice Stegers) is a New Orleans housewife who has been renting a room in a boarding house for the purpose of having an affair with her lover Fred (Roberto Posse).  Jane's daughter Lucy (Veronica Zinny) soon puts two and two together and decides to punish her mother in a rather cruel way.  When called and informed of what has happened she has Fred drive her home and, on the way, he is killed when he loses control and goes into a guard rail.
The chain of events is too much for Jane and she spends a year in a mental institution.  Upon leaving, having been divorced by her husband (Fernando Pannullo), she returns to the boarding house, now solely run by blind instrument repairman Robert (Stanko Molnar).  He becomes suspicious when he starts hearing familiar sounds coming from her room as she calls out Fred's name and, having an attraction to her himself, begins trying to figure out if Fred has actually returned or if she has taken another lover.  Meanwhile, Lucy starts again to plot against her mother, hoping to use Robert to learn her secret.
Largely this is an atmospheric slow-burn of a movie that builds up to some rather disturbing visuals and revelations.  Lamberto Bava is already willing to push some boundaries, but he follows an important rule when it comes to making a movie: build up to a payoff.  When the payoffs start coming it is worth it, even though like a lot of Italian movies it should have ended shortly before it does.  I'm sure that Bava was pressured to do a Carrie-like surprise at the end, but what is done is simply ridiculous, and is probably the reason this isn't a more well-known film.
The acting is generally decent, although the English dubbing on Veronica Zinny is often hilariously overwrought.  The New Orleans accents, though I think dubbed by Americans, are often laughable.  Still, it's got some great shots of the Crescent City and various locations and, to its credit, doesn't dwell on the well-worn locations for shooting.  It is a nice debut and, as much as I agree Demons is the peak of his career, it still would have been nice to see Lamberto Bava do more films like this.
Macabre (1980)
Time: 89 minutes
Starring: Bernice Stegers, Stanko Molnar, Veronica Zinny
Director: Lamberto Bava