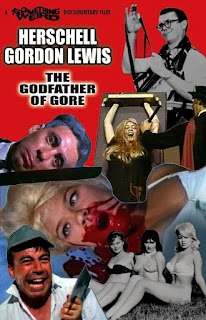 It is probably not much of stretch to say that Herschell Gordon Lewis, despite his success as a low-budget exploitation film maker, would have been largely forgotten by the 1980s if not for director Frank Henenlotter and film buff Jimmy Maslon.  The two of them began pretty much a campaign to save Lewis's work, making sure that such movies and Blood Feast, 2000 Maniacs!, She-Devils on Wheels and much, much more didn't rot away like so much cinematic history has.
As for Lewis, he had quit making films in 1972 after The Gore-Gore Girls.   He knew how to make drive-in fair for the 1960s and make a profit off of it, but times were changing and Lewis was getting older.  Over the years he sold his interest in the movies he made and, always being an advertising man at heart, made a career in direct mail marketing - largely in being paid by large companies to show them how to do it.  So, while watching any of his films, just remember he is pretty much responsible for that wad of stuff that clogs the mailbox every Wednesday.
Herschell Gordon Lewis: The Godfather of Gore is pretty comprehensive, starting off with the first film he was involved in (The Prime Time) and his burgeoning partnership with David F. Friedman, with whom he first made a series of "nudie cuties" before presenting the world with one of the first slasher films, Blood Feast, when the two wanted to find something new to shock audiences.  It worked, and though Friedman and Lewis split due to a disagreement during the making of their next few films, Lewis himself continued turning a profit.  Throughout we get interviews with Friedman, Henenlotter, Joe Bob Briggs and a number of other fans and actors from his films, but the major one is with Lewis himself who is willing to patiently go through his cinematic history.
Along with Lewis's game participation one of the biggest thrills for fans is seeing footage from one of his movies that didn't make it to release, and strangely, though it definitely is something typical of Lewis's style, it seems much better than a lot of stuff of his that made it to completion.  The only glaring omission is that the documentary ignores the fact that Lewis, though he had been idle for 40 years, made his own sequel to Blood Feast in 2002 (other directors had remade the film or had produced semi-sequels before), and another film in 2009 called The Uh-Oh Show.  They didn't get the best reviews, but neither did any of Lewis's "classics," and it would have been interesting to remind people that, at least in 2010, he had come out of retirement and was making the occasional movie.  Before he left our world in 2016 he managed to do two segments for an anthology film, Herschell Gordon Lewis's Bloodmania.
What one gets from this documentary is that, although Lewis was largely in it for the money and, like Roger Corman, seems to hate to admit having any great love for what he has done, he seems to still have a place in his heart for the movies he made and the little bit of influence they had on directors like Henenlotter and John Waters.  They may not be great films, but they were often much better than one would expect them to be, and this is a fitting tribute to both Lewis and to a period of exploitation film making where even those trying to make a quick buck had to keep on their toes as the times were changing so quickly.
Herschell Gordon Lewis: The Godfather of Gore (2010)
Time: 106 minutes
Starring: Herschell Gordon Lewis, David F. Friedman, Mal Arnold, Jerome Eden, Frank Henenlotter
Directors: Frank Henenlotter, Jimmy Maslon