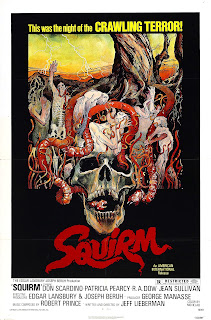 Films like Frogs and Squirm quickly went from the big screen to the small one, populating late night movies and Saturday morning science fiction programs - in heavily edited versions, of course - during the late 1970s and throughout the 1980s.  It was guaranteed along with Godzilla and Universal monster films that all the various knockoffs of The Birds would get some play, especially if The Birds was out of the budget for a lot of independent stations.  It wasn't too hard to cut out an extra bit of gore, language and sex to get these films - which didn't always rely on all that any way - to a state where parents wouldn't scream about their kids watching them.
In most cases, due to environmental disasters of the time dealing with the fact that everyone just seemed to be dumping their waste products, both organic and inorganic, in every river, lake and forest they pleased, many of these films had an environmental cause of their premise.  Other times it was just because and sometimes, like the killer bee movies, sensationalizing actual things that had happened.  Then there is Squirm, where it is simply a matter of making the audience feel as uncomfortable as possible, especially since a lot of times worms themselves are associated with death and decay.
After a major storm the town of Fly Creek, Georgia is left without electricity due to downed power lines.  Unfortunately, one power line is still active, and pumping thousands of volts into the ground.  It's after this storm that Mick (Don Scardino), a boy from New York, comes to visit his new girlfriend Geri (Patricia Pearcy), who is one of the locals.  Except for Geri's sister Alma (Fran Higgins) and their mother Naomi (Jean Sullivan), none of the other locals tend to be too happy with Mick's presence.  That includes Roger (R.A. Dow), the son of local worm farmer Willie Grimes (Carl Dagenhart), who happens to have a crush on Geri, and Sheriff Reston (Peter MacLean), who just sees Mick as another troublemaker.
When Geri and Mick find a skeleton near an antique dealer's home they begin investigating.  Mick, with the help of Alma, discovers that it was the antique dealer himself.  He starts to put two and two together, but the clencher is when Roger is attacked by the worms while fishing.  Soon hundreds of thousands start to come out of the ground, engulfing the town in waves of hungry annelids.  While Mick, Geri and her family try to survive the night, Roger, driven crazy by the pain and the worms burrowing into his body, decides to take revenge on the two young lovers.
I know this isn't considered to be a good movie by any stretch of the imagination, and it was Jeff Lieberman's directorial debut.  He would go on to make a number of horror and cult films, the most famous being Blue Sunshine.  He would get better, but he's still not bad here, despite a cast of unknowns and a script that takes a while to get going.  This has pretty much every cliché of an animals attack movie with a bit of hixploitation thrown in.
This was Jean Sullivan's last role, and she is really the only known actor here.  Despite her exaggerated Southern accent - which she did as her own tribute to Tennessee Williams - the little she is in the movie is effective, since she is pretty much shell shocked from the moment the storm hits.  Don Scardino and Patricia Pearcy are the young leads, and both would use this movie to go on to directing and acting careers, mainly in television.  There is no Fly Creek, but Port Wentworth, Georgia filled in for the location, with a number of locals as extras and in small bit parts as well.
The stars, of course, are really the worms, and there are a number of different species mixed in with plastic models.  It's hard to tell what's what, since the live worm contingent numbered around 250 thousand - enough that it caused a shortage for the region's fishing season in 1975.  And, while one would think the worms would be quite easy to get away from, the sheer number of them coming out of the ground, making the whole town a writhing, hungry mass, creates a scenario that, though not exactly believable, still at least provides an in-story reason for all the deaths.
Silly as it is this is one of the better movies of its type, unhampered by a lot of extra plots (no big celebration or shopping mall that the mayor is trying to push through), and largely turns into survival horror by the end.  Watching Squirm gives me a bit of a nostalgic feeling, more-so than a lot of the other animals attack films, and still manages to work well after all these years.
Squirm (1976)
Time: 92 minutes
Starring: Don Scardino, Patricia Pearcy, Fran Higgins, Jean Sullivan, R.A. Dow
Director: Jeff Lieberman