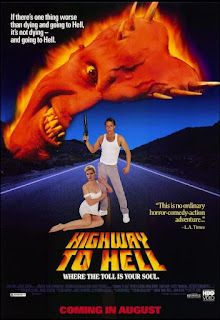 We may not have had drive-ins in the 1990s like previous generations did, but we certainly had video stores.  Often many of the direct-to-video movies that popped up from the mid-1980s onward was mediocre sequel material, soft-core comedies and suspense films and horror films that barely had enough budget to go out and buy Halloween masks for the monsters.  Still, there were those movies that were heirs to the drive-in, and even some that should have had their chance to play on a the big screen.
Highway to Hell was written by Brian Helgeland, who has a decent history of writing credits as well as some director credits - which unfortunately tend to be stuff like A Knight's Tale and The Order, which is not necessarily what one looks for on a resumé.  The former does have some of the quirky style one would expect after watching Highway to Hell, but this particular movie is unique out of everything that Helgeland has done.  It's also unique for Dutch director Ate de Jong, who had a long run of movies in the Netherlands, but whose only feature film in the U.S. up to that point was Drop Dead Fred - a movie that I am typically alone in enjoying.
Ostensibly a vehicle to give Rob Lowe's younger brother Chad an early starring role, Highway to Hell was filmed in 1989 and then promptly shelved, getting a limited theatrical release before hitting the shelves of Blockbuster and Hollywood Video.  I'm assuming it probably made its way onto HBO as well since their name is on the VHS box, but, despite having the entire Stiller family and a number of great cameos, as well as being quite a bit of fun, it was largely forgotten over the years.  Not by me, because I always thought this was one of the best direct-to-video movies I had seen, and I was not the only one, as it has finally started to get a small cult following.
Charlie Sykes (Lowe) and his girlfriend Rachel (Kristy Swanson) are on their way to Las Vegas to elope.  Spooked by a cop at a diner Charlie decides to get off the interstate and take a backroad, despite being warned by an old gas station attendant named Sam (Richard Farnsworth) that it's not a good idea to go that way.  Charlie goes on his way, only to soon encounter Sgt. Bedlam (C.J. Graham), a literal cop from Hell who kidnaps Rachel and disappears.
Charlie returns to Sam and learns the truth: a portion of the road is the highway to Hell, and Rachel has been kidnaped by the Hellcop.  Charlie is given an old, souped-up car by Sam in order to get into Hell and make it back before he and Rachel would be trapped there forever.  Hot in pursuit of the Sergeant, Charlie encounters a gang of bikers led by a man named Royce (Adam Storke), as well as a kindly tow truck driver named Beezle (Patrick Bergen) and his ward Adam (Jarrett Lennon).  In order to rescue Rachel he must make it to Hell City before the Hellcop does, rescue her and return to the world of the living within 24 hours.
Despite being called Highway to Hell, it does not feature the expected AC/DC song.  The film only had 9 million dollars to work with, and licensing the song would have cost more than most of the crew and actors were getting paid.  Despite that there is still a haunting synth-pop soundtrack with blues and gospel leanings provided by a group called Hidden Faces.  Much of the budget went into trying to make the practical effects work as best as possible, even if it sometimes does look like things are being dragged around with strings.  It is almost a movie that has too much ambition for its own good, which was probably why it was shelved.  It's both a fantasy horror film and a comedy, and with Chad Lowe obviously not being a bankable lead - both Patrick Bergen and Kristy Swanson were more well-known than him at the time, and both still had decent careers ahead of them - there wasn't much to convince a major studio that this would do well with audiences.
Truth is, Lowe isn't bad, and I think his thin stature was what de Jong and Helgeland were going for with Charlie.  He has the look of an everyman, just not of a teenager.  Neither does Swanson, either, although she would continue playing teenage roles the next few years, most notably in Buffy the Vampire Slayer.  She is more of a McGuffin in this, which is sad because she is able to carry a movie on her own, but despite that it was always nice to see her in the '80s and '90s b-movies she often popped up in.  Bergen makes an excellent bad guy, playing his role with calm and demeanor rather than overacting, but C.J. Graham is always going to be the most memorable part of this.  Hellcop, or Sgt. Bedlam, is one of the greatest bad guys in horror history.  The character has presence and, again, is not overplayed.
There are many memorable set pieces, lots of Hell puns, and lots of scenes that would have been better if the budget was kicked up about another 10 million.  Despite that, Highway to Hell is a movie that still is quite enjoyable even if it is very much of its time.
Highway to Hell (1991)
Time: 94 minutes
Starring: Chad Lowe, Kristy Swanson, Patrick Bergen, C.J. Graham, Richard Farnsworth
Director: Ate de Jong