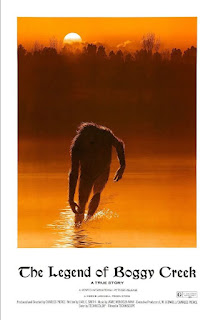 Fouke, Arkansas had just over 500 residents in the early 1970s.  Largely a farming community, it is in an area of the state not far from the borders with Texas and Louisiana.  One of the reasons it is prime farm land is because a good deal of the area is made up of creeks and other wetlands that ultimately drain into the Sulphur River, which itself is part of the larger system of rivers that contributes to the Mississippi.  It's a long-occupied region of the United States, first by the native Caddo tribes and later by European families.
It is similar to many other rural communities in that part of the country.  Its position on Highway 71 does not lend to it being a major destination, but, as it says in The Legend of Boggy Creek, one of those places that one most likely doesn't even know they ever drove through.  It would have remained that way if not for Charles B. Pierce, a television producer, children's show host and weatherman who heard about a bigfoot-like creature that supposedly had roamed the area since the 1940s, and possibly a century prior.  He borrowed $160,000 from L. W. Ledwell, who had a business customizing pickup trucks for business use, and hired some high school students from Texarkana to both serve as crew and actors.  Through interviews with locals, as well as having his own actors and the locals reenact some of the supposed sightings and encounters with the creature, he managed to put together a halfway convincing pseudo-documentary that became one of the biggest hits of 1972.
We begin with our narrator (Vern Stierman) as a child (Chuck Pierce Jr.), hearing the cry of the beast after trying to convince locals that his mother had seen a hairy wild man on her property.  Our narrators presents a bit of information about the town of Fouke before showing a series of interviews with the locals and moving on to the first of a series of reenactments, with three women in an isolated cabin being frightened by the beast.  We then learn about a family named the Crabtrees, many of whom had encounters with the creature over the years.  After a young boy fires on the creature while hunting for deer and supposedly wounds it a hunt is organized, but the creature is not located.  Rather, it seemingly disappears back in the woods for a number of years.
The beast does return, this time more aggressive, and the movie documents its attack on three teenage girls having a slumber party and then on two young couples staying in a rental.  The latter is the longest portion of the film, as over two nights the wives and children of two brothers endure attempts by the creature to enter the home, culminating in a full-on attack on another visiting brother.
"Vern Stierman", the narrator, is actually Charles B. Pierce, and he did quite a lot of the movie on his own, including singing the two signature songs on the soundtrack.  The music was provided by Portuguese composer Jaime Mendoza-Nava, whom Pierce had met in Los Angeles when he went there to edit the movie.  Pierce tried to drum up some interest, but ultimately failed to initially do so.  Undeterred, be bought the Paramount Theater in Texarkana, which had recently closed, and reopened it largely to show his movie.  Soon, by word of mouth, the movie was a regional hit and played the rural theater and drive-in circuit, eventually becoming one of the biggest films of the year.
In execution it is surprisingly well done.  Unfortunately, most people who have seen the movie have probably encountered washed-out pan-and-scan prints on VHS or the same on DVD, just poorly transferred.  Pierce's daughter Pamula remedied this in 2018, and in recent years it is possible to see the film as it was meant to, albeit with some light leakage onto the film most likely caused by the fact that he was using a 35mm camera he had rebuilt himself.  If Pierce had decided to go into making nature documentaries or something afterward I would not have been surprised, as he has a good eye for photography. There is some awkwardness in the transitions between the nature shots, and of Chuck Jr. running through the fields, and scenes where acting students and non-actors are asked to perform.
That said, the documentary portion works well, as does the whole ending sequence with the Fords being attacked in their rental home.  The monster itself is portrayed by a guy in a cheap gorilla suit, but Pierce knew enough to film from as far away as possible or in darkness whenever the creature had to be revealed.  The Fouke Monster has been described as having three toes, standing about seven feet tall, having an awful smell and emitting a frightening, mournful cry, and at least Pierce tried his best.
I'd say the strangest part is not the story about the creature itself - legends of creatures like the Fouke Monster have been around forever - but folk music interludes singing about the monster and about a local boy named Travis Crabtree.  It is almost as if Pierce knew he had a decent movie on his hands, but that he still needed that extra dose of weirdness to push it over the edge.  Despite that bit of awkwardness The Legend of Boggy Creek went on to effectively scare a number of generations, create a tourist industry for Fouke, inspire some terrible sequels (one directed by Pierce himself) and a whole mess of books and other documentaries.
The Legend of Boggy Creek (1972)
Time: 87 minutes
Starring: Vern Stierman (Charles B. Pierece), Chuck Pierce Jr., Glenn Carruth, Bunny Dees, Sarah Coble
Director: Charles B. Pierce