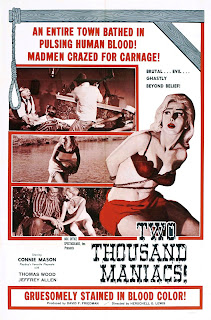 While Herschell Gordon Lewis was never an amazingly skilled director he did evolve beyond the crude style of Blood Feast and the handful of "nudie cuties" he did prior.  The improvement is quite evident in Two Thousand Maniacs!, one of two gore films he did after Blood Feast became a drive-in hit.  With money from an Illinois theater owner he had a larger budget, the chance to actually scout a place to film and the ability to get willing extras other than just shocked bystanders wondering what was happening outside the hotel.
What also became apparent is that Lewis was willing to step in and do almost anything.  He had made the signature music of Blood Feast, and again did so with Two Thousand Maniacs!.  There was more of his strange organ music, but this time combined with a number of bluegrass songs ("Robert E. Lee Broke His Musket on His Knee", the movie's theme song, being the most memorable), performed by a band dubbed the Pleasant Valley Boys with Lewis providing the vocals after he was unsatisfied with the original singer.  While A Taste of Blood is thought to be the director's big foray into trying to be more commercial, Two Thousand Maniacs! is the one that seems more like a modern independent horror film.
It's 1965 and the town of Pleasant Valley is celebrating its centennial.  The only thing they need is guests of honor, something that Rufe Tate (Gary Bakeman) and his partner in crime Lester (Ben Moore) drum up by detouring a number of tourists with northern license plates into the town.  The first car contains two couples, John (Jerome Eden) and Bea Miller (Shelby Livingston) and David (Michael Korb) and Beverly Wells (Yvonne Gilbert).  The second car is occupied by Terry Adams (Connie Mason) and Tom White (William Kerwin), a hitchhiker on his way to teacher's conference in Atlanta.
Upon arrival they are met by the town's boisterous Mayor Buckman (Jeffrey Allen), who sets them up in the hotel and invites them to a barbeque as well as the festivities.  What they quickly find out is that they are the festivities, as the townspeople set about separating everyone from each other in order to kill them in a number of grisly ways.  Tom, suspicious from the beginning, soon finds out the truth behind the town and does what he can to get him and Terry out and alert the authorities.
Although this is a vast improvement over the previous film in terms of storytelling and actual filmmaking it still has some major problems.  Often the dialogue is hard to hear, largely from either being the original live feed or from poor dubbing.  The other is that a major plot point in the movie, discovered early on by Tom, is explained again in its entirety by the officer at the end with Tom and Terry seemingly surprised by information that have known for over 24 hours.
Where it counts, however, Lewis makes it work.  There are obvious mannequin parts used in some of the dismemberment scenes, but it wasn't like Tom Savini was around to do realistic prosthetic mock-ups.  Lewis and his crew were still in unexplored territory, figuring out how to do effects as things went along.  There is a nice build-up to the first kill to make the shock work, and some great set-pieces such as the barrel roll and a dunk tower refurbished to drop a large rock on a victim.  In some cases the fact that the actors are amateurs makes their reactions to the realization of what everyone is up to a bit more genuine.
Mason, despite being horrible in Blood Feast and supposedly not getting along with Lewis on that movie, returns again as the female lead.  She's still not great, but at least it feels like she took the time to learn the dialogue this time around.  William Kerwin is again the leading man, doing his square-jawed best.  The highlight is Jeffrey Allen (hiding his real name, Taalkius Blanc, since he wasn't a member of the Screen Actors' Guild) chewing the scenery as Mayor Buckman, putting on the Foghorn Leghorn routine while also gleefully participating in the murders.
The movie is gory as advertised, with some hints of sex but without even the brief nudity seen in Blood Feast.  That allowed the film to go out on the drive-in circuit without too much controversy, although it didn't do the same box office as his previous movie.  Despite that, it was Lewis's personal favorite of the movies that he did, and I understand and agree with that assessment.  It could have used a bit more polish, but even adding that veneer didn't help make 2001 Maniacs a better movie even though it is basically a retelling of the same story.  Whether he would have admitted it or not Lewis, when he actually cared about a project, had a personal touch that came through despite the budget, the content or his limitations as a director.
Two Thousand Maniacs! (1964)
Time: 83 minutes
Starring: William Kerwin, Connie Mason, Jeffrey Allen, Gary Bakeman
Director: Herschell Gordon Lewis