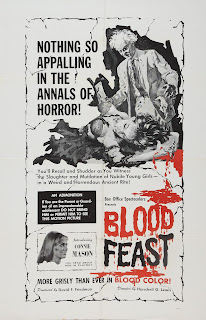 When approaching a Herschell Gordon Lewis film it is important to remember that, unlike other bad film makers like Ed Wood Jr. or Coleman Francis, Lewis had no pretentions or self-delusion about what he was doing.  He and his producer David Friedman were making trash films for the very reason that trash, if marketed well, could make a bigger profit than a big-budget Hollywood film.  Not just in the short term, either.  Blood Feast was still making the rounds of drive-in theaters long after Lewis had made his bundle, sold the rights and completely abandoned cinema to go into the business of mass marketing through the mail.
Better directors than Gordon felt the same way about their product, selling it off and forgetting about it once times changed.  And, in fact, Blood Feast came about because times changed.  Lewis and Friedman made their first profits off of "nudie cuties," basically slapstick comedies that featured naked women or thinly-plotted features that took place at nudist camps.  As nudity became more acceptable in mainstream films they figured they would push the envelope when it came to showing on-screen violence.  Because they were already in Florida, with Lewis doing a movie-for-hire about a burlesque dancer, they got some local talent and a Playboy centerfold, used the hotel they were staying in and churned out what is now considered the first slasher film.
Fuad Ramses (Mal Arnold) runs a catering business in a Florida town, but is also secretly a serial killer that has been going around collecting women's body parts.  Det. Pete Thornton (William Kerwin) is doing his best to find the killer when not romancing Suzette Fremont (Connie Mason).  With Suzette's birthday coming up her mother Dorothy (Lyn Bolton) wants to do something special, and hires Ramses to do an Egyptian feast.
The feast, it turns out, is to honor the goddess Ishtar, and in order to do so Fuad must collect certain body parts, cook them and serve them to the guests.  Suzette is intended to be his main sacrifice, but after attending a lecture on ancient Egyptian religious practices, Det. Thornton starts to put things together and rushes to capture Ramses before it's too late.
I will never go so far to say that Herschell Gordon Lewis made a truly good film, and from what I've heard if he was still with us he would be even less generous in his assessment.  The closest he got was Two Thousand Maniacs!, released the following year largely due to an Illinois drive-in mogul who was so impressed with returns from Blood Feast that he agreed to kick in money for Lewis to make more stuff to show on his screens.  Although Blood Feast is the most well-known of his movies (although The Wizard of Gore got some brief fame due to the movie Juno) it is also one of the roughest and most amateurish.  There was little post-production work done on ADR, with some of the dubbing obviously not matching the lip movements.  Largely the camera is static (save for some handheld work toward the end which is not badly done) and it's obvious that different corners (and sometimes the same corner, just redecorated) of various rooms were used for the various locations.  When filming outside there are often spectators standing around wondering what is going on.
The cheapness of the movie does more to add to the enjoyment of watching it.  This has no underlying message and no agenda other than to turn a quick buck and move on to the next project, yet it still manages to feel like a weird passion project in the vein of Miami Connection.  I know that probably says a lot more about the ineptness of Miami Connection than it does about Blood Feast, but perhaps it's Mal Arnold's hilarious overacting and William Kerwin's earnest efforts at reading Lewis's dialogue and trying his best to be a leading man that makes this feel a little better than it should be.  For her part Connie Mason is there just so the word "Playboy" can be printed on the poster, as she couldn't remember any of her lines and even when reading them off a lamp.  Even with assistance she still can't manage to sound any better than if it was her turn to read a paragraph in class.
Blood Feast is one of those films that appeals to a certain audience - one that knows what they're getting into and does not have high expectations of a film just because someone like Frank Henenlotter, who honestly isn't that much better a director than Lewis, hung the world "classic" on it.  Even with a Hollywood budget at the time Lewis probably wouldn't have been able to do better, and probably would not have been interested.  Blood Feast made money, as did several other of his films, and to the credit of Henenlotter and Jimmy Maslon they saved this and many of his other films from obscurity or from rotting away in an attic somewhere.  I'm sure there are many critics that wish they had left them there, but in this instance the person behind it was just as surprised as everyone else that anyone actually took a serious look at anything he did.
Blood Feast (1963)
Time: 67 minutes
Starring: Mal Arnold, William Kerwin, Connie Mason
Director: Herschell Gordon Lewis