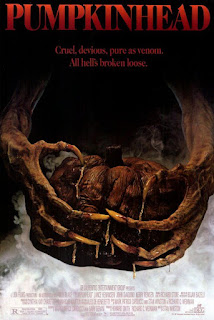 Stan Winston was one of the major special effects artists in Hollywood.  He provided the creature designs and effects work for The Thing, The Terminator, the first two Jurassic Park films and, shortly before his death, Iron Man.  One of the things he most wanted to do at some point in his career was move from just doing the effects to directing, and that opportunity arose with the script for Pumpkinhead.  He was asked to create the creature design, but instead asked to direct it.
As a result, and largely due to Winston knowing what effects could be done on a meagre budget, Winston delivered what has since become a cult hit.  A monster film rather than a straight horror film, Pumpkinhead was lambasted by critics at the time but eventually became a bit more revered for being able to successfully bring such a story to the screen under what would be challenging circumstances for most directors.  In this case he also knew the best thing that he could do is step back and just be the director, allowing his effects team to do the work and trusting them to understand what he wanted.  In the end, although he didn't manage to make a great movie, he at least succeeded in making it interesting.
Ed Harley (Lance Henriksen) owns a store in a rural area.  His son Billy (Matthew Hurley) is the apple of his eye and, Ed hopes, clever enough to leave the town once he grows up.  Those hopes are dashed when a group of dirt bikers decide to do an impromptu ride near his store.  When Billy chases after his dog Gypsy despite his father's insistence to stay put, Joel (John D'Aquino) accidentally knocks Billy down and breaks his neck.
While Joel and the others flee the scene Chris (Jeff East) stays back to let Ed know what happened and see if he can help.  While Joel becomes insistent that they cover the death up, to the point of locking two of his friends in a closet, Ed takes matters into his own hands.  Seeking a witch named Haggis (Florence Schauffler) he asks her to raise a local demon called Pumpkinhead to take revenge.  Only problem is, Ed soon finds out that he must see each of the victims killed through the monster's eyes, and soon regrets his decision.  Hoping to undo some of the wrong he begins to seek a way to stop the beast he has unleashed.
Pumpkinhead is pretty much a horror movie on rails.  Nothing surprising happens, the deaths aren't particularly imaginative and none of the protagonists - even the ones that survive - really stand out.  One thing the film does rely on is an excellent creature design, combining a man in a suit (Tom Woodruff Jr., one of the effects crew) with Winston's signature animatronics.  Where most movies with a similar budget would have made a partial creature and filmed most of it in darkness Pumpkinhead looks amazingly lifelike.
The movie also relies heavily on atmosphere.  Much of the movie is lighted in a way to purposely recall the films of Mario Bava, with garish colors (usually red or orange, but occasionally blue) and a whole lot of mist and fog to shine the light through.  For a first-time director Winston seems to know what he's doing to at least make a movie visually appealing as well as quite unsettling.  There are a few day-for-night shots that are way too obvious, but for the most part he manages to make the movie look like it was a much more prestigious production that it was.
On the performance side Lance Henriksen gives it his all, designing dentures to make himself look less like a Hollywood actor and supplying a lot of the clothes and other items belonging to Ed Harley in the movie.  While the performances of the leads are pretty bland there are a number of character actors that shine, including Buck Flowers as the patriarch of the local Wallace clan (showing that he doesn't always have to play a bum or the local drunk) and Florence Schauffler, though buried under a few pounds of makeup, as Haggis.  The introduction also makes it clear that the movie might have been much better if the revenge was due to some local dispute rather than trying to shoehorn the usual trope of killing off a bunch of teenagers out in the woods.
As for Winston, he made the decision not to return for the sequel.  Unfortunately, other than a handful of music videos, his only other feature film was A Gnome Called Gnorm, which again featured some of his company's great creature effects but, unlike Pumpkinhead, never really had a chance of finding an audience.  Happily, once he got the director bug out of his system, we still had another two decades of Winston's wonderful creations.
Pumpkinhead (1988)
Time: 86 minutes
Starring: Lance Henriksen, Florence Schauffler, Matthew Hurley, John D'Aquino, Jeff East
Director: Stan Winston