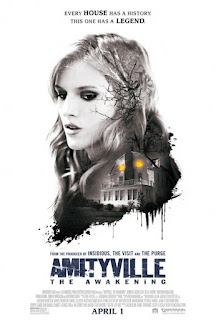 Possibly the real Amityville curse is that, after over four decades, no one has figured out how to make a good movie based on the source material.  True or not, one would think that, after years of classic haunted house movies, one of the Amityville films would at least figure out the formula.  The Amityville Horror had its moments, but was largely and overlong tedious slog, while the less said about the remake the better.  Amityville II: The Possession ruined a perfectly good b-grade horror film by tacking on more tedious nonsense, while the Amityville 3-D undercut a decent haunted house story with a silly gimmick.
That brings us to the early 2010s.  Despite this movie coming out in 2017 it was largely conceived in 2012, which is probably the reason Bella Thorne spends most of it looking like a stoned mime.  The filming was done in 2015, with a ton of reshoots in 2016, but it is obvious that no one thought to check and see if teenagers had changed at all in the intervening years.  The film also carries over a trend from the late 2000s of being "self-aware," as this doesn't take place in any of the other Amityville timelines, but instead in our world where the book and the movies are considered to be fiction.  This self awareness, obviously, never went as far as looking at the script and the whole idea for the movie and just abandoning it.
Belle (Thorn), her mother Joan (Jennifer Jason Leigh) and younger sister Juliet (Mckenna Grace) move into the home at 112 Ocean Avenue.  Supposedly it is so her brother James (Cameron Monaghan), who is in a coma, can be near to his physician Dr. Milton (Kurtwood Smith).  Joan and her sister Candice (Jennifer Morrison) are fully aware of the house's history, but fail to let Belle or Juliet in on it.  Belle, of course, eventually finds out from students at school.
While the whole legend is thought to be fiction, things do start happening once they are in the house.  Juliet begins speaking with James, who appears to be slowly coming out of his coma.  What concerns Belle is that she is not sure that it is truly her brother and suspects that whatever convinced Ronnie Defeo Jr. to murder his family may be taking over James.
Though top-billed, Jennifer Jason Leigh isn't in this much, and really does nothing more than be a distant parent to Belle.  This is pretty much Bella Thorne's film, which is a pity since she's barely capable of taking on even material this simplistic.  If the movie would have come out when originally scheduled it would have been Mckenna Grace's first film, but she just plays the token little girl and not much else.  In typical Hollywood fashion everyone, including a nerd named Terrence (Thomas Mann) that befriends Belle at her school, looks like models and not normal people at all.  Even Cameron Monaghan, while laying in a coma most of the film, looks like he stepped out of a teen drama.
As for the movie it tries to be a cross between Patrick and Amityville II, failing heavily and failing even heavier by trying to shoehorn a troubled teen story into it.  Ultimately it became the last Amityville film to get theatrical release, but that was limited, with it going to direct to streaming and DVD almost immediately.  It probably would not make the movie any better but about 15 minutes or so was chopped out of the movie when suddenly Dimension decided they wanted to make it another PG-13 horror film.
Since then the entire idea of Amityville has been dying a death of a thousand papercuts with all the direct-to-video garbage related to it.  Despite that, as a series anyone cared about, about the only good thing Amityville: The Awakening did is convince studios not to waste any further money on it, since the movies that came after might as well have been done by a 16-year-old with an iPhone.
Amityville: The Awakening (2017)
Time: 87 minutes
Starring: Bella Thorne, Jennifer Jason Leigh, Cameron Monaghan, Mckenna Grace
Director: Franck Khalfoun