Scouts Guide to the Zombie Apocalypse (2015) 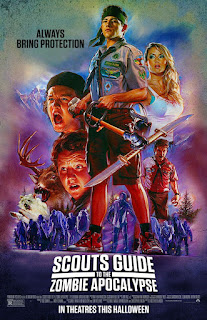 Dead Alive, aka Braindead, is a wonderful movie.  Peter Jackson manages to mix horror and humor quite well and ended up making one of the goriest movies ever.  Obviously influenced somewhat by Evil Dead II as well as Return of the Living Dead he made something that no one has yet been able to equal.
Unfortunately, every few years or so a young filmmaker or screenwriter sees Dead Alive and tries.  Too many of those are Canadian or American, and I say this because Dead Alive is rife with both dry and absurd New Zealand humor.  When it gets to North America it seems too many would-be imitators see some of the gross-out humor and the effects and think that they can do the same thing.  Unfortunately, we live in a time where a good portion of Hollywood has barely any grip on humor.
So we get Scouts Guide to the Zombie Apocalypse, which tries to do the Dead Alive formula, but adds a  big dollop of Superbad on top.  At its heart it is not a bad concept, but I have seen that with a number of "quirky" films lately, Freaks of Nature being one that quickly comes to mind.  Always the main character is a bit of an outcast or an underdog, there are friendship problems to work out and, because they are teenagers, there is the whole young love subplot as well as the horny best bud.  There may be blood and limbs flying everywhere, but the central theme is friendship and/or family - which means not being content on cribbing from Peter Jackson, these writers also have to throw in a dash of Shaun of the Dead.
Ben (Tye Sheridan), Carter (Logan Grant) and Augie (Joey Morgan) have spent most of their lives in the American Society of Scouting, the first two largely to support their friend whose father passed away.  They are about enter their junior year of high school and, while Ben and Carter are secretly planning to quit being scouts, Augie is about to receive his "Condor Badge".  A campout with their leader, Scout Leader Rogers (David Koechner), is planned for the presentation of the badge.  Carter, however, manages to get an invited a secret senior party, and convinces Ben to sneak off.
Everyone's plans are interrupted when a zombie escapes from a secret lab near town.  Soon the plague expands, with the military evacuating most of the town while the kids are camping.  The evacuation is largely to get the civilian population out before bombing the town help keep the zombie outbreak contained.  While headed to the party Ben and Carter soon find out what has happened, and are joined by a cocktail waitress named Denise (Sarah Dumont), who attempts to help them survive.  Problem is, the military is unaware of the senior party, and Carter and the others must battle to get there to save his sister Kendall (Halston Sage) before it is too late.  Calling on everything they learned in the scouts they begin taking the fight to the zombies.
While this is not a great movie it is at least watchable.  It does have some humorous parts - Scout Leader Rogers's obsession with Dolly Parton and Ben finding an unconventional method of keeping from falling into the waiting arms of his zombie neighbors - but it also contains a number of parts that are cringeworthy.  One, surprisingly not mentioned in this age of constantly arguing what consent is when Carter grabs the exposed breasts of a zombie police officer, as well as Sarah's advice to Ben (who harbors a crush on Carter's sister) to just walk on up and give Kendall a kiss.  It's as if parts of the film are from a completely different era, and it is usually stuff I forgive, but by 2015 things had changed enough to erase that "different time" excuse.
Then, like in Freaks of Nature or [REC] 3: Génesis, what are supposed to be the big, hilariously gory finales never materialize.  So many films have tried to copy Lionel Cosgrove literally mowing down zombies in his home, but without Peter Jackson's inspired direction the excitement they are going for just never materializes.  Christopher Landon's directing is a big part of why this film falls flat in the end, as he directs like a hired hand rather than as someone who is passionate about the project.  One of the few creative scenes is when our heroes are confronted by zombie cats in a home owned by a mean old lady played by the late Cloris Leachman.  When it comes to the scouts and their improvised weapons at the senior dance the action is largely muddled and is full of enough CGI to make it look like a video game.  What makes this even more disappointing is that Landon knows how to put passion and humor into a quirky horror project, being the guy behind the camera Happy Death Day movies.
It's a shame because this movie had a good premise, some good ideas and a great cast.  Everyone seems to be having the time of their lives and are fully committed to the story and their characters.  Maybe if the director had been as well, and had paid attention to what made horror comedies of the past so disgustingly funny, this would have succeeded.  Unfortunately, once again it's another example of how much Hollywood barely understand either horror or humor.
Scouts Guide to the Zombie Apocalypse (2015)
Time: 93 minutes
Starring: Tye Sheridan, Logan Miller, Joey Morgan, Sarah Dumont, Halston Sage, David Koechner
Director: Christopher Landon