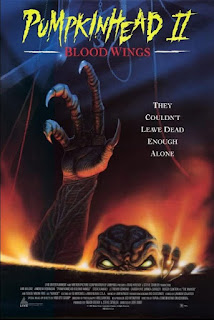 Despite having a number of flaws, Pumpkinhead has managed to become a minor cult film.  A lot of it had to do with the great creature design, designed by Stan Winston's effects company, as well as a creepy, atmospheric directing style by Winston himself.  The story may be thin and many of the main characters unmemorable, but the film sticks with the viewer afterward.
Winston directed another movie - a disastrous flop called A Gnome Named Gnorm - before returning to effects work when not occasionally making music videos.  Ed Harley, the character Lance Henriksen played in the first movie, died at the end of Pumpkinhead, having committed suicide in order to stop Pumpkinhead's rampage.  Pretty much Stan Winston made what should have been a one-off film without much room for a sequel, even if there were hints that Harley's soul may be used to power Pumpkinhead the next time it is called upon.
That fact never seems to keep studios from figuring out a way of making a buck, so in 1993 we got Pumpkinhead II: Blood Wings.  I think it may have had a small theatrical release, but it was one of those usual horror films sitting on the rental rack and gathering a layer of dust.  While the first first movie gradually gathered some positive recognition, the sequel is rightfully regarded as an unnecessary and disappointing follow-up.
Hoping to find some peace in his life and a nice place for his family to live, Sean Braddock (Andrew Robinson) leaves New York to return to his home town of Ferren Woods to become the new sheriff.  Partially his decision was fueled by the trouble his daughter Jenny (Ami Dolenz) kept getting into in the city.  Unfortunately, the first thing she does is head over to the troublemakers, led by Danny Dixon (J. Trevor Edmond).  Along with him and his friends Marci (Soleil Moon Frye), Peter (Hill Harpter) and Paul (Alexander Polinsky) they go out one night driving and accidentally hit an old woman.
The woman happens to be Miss Osie (Lilyan Chauvin), a woman rumored to be a witch, and indeed they find a spell in her cabin to raise the dead.  Deciding to try it out they dig a body out of a grave in her yard.  Unfortunately, while doing so, Miss Osie accidentally lights her cabin on fire.  While the kids think the spell didn't work it manages to raise the spirit of Pumpkinhead who goes about taking revenge on a number of locals responsible for a crime in the past - before it sets its sites on Jenny, Danny and his crew.
In all honesty this had the potential, if it decided to go the full camp route, of being decent.  It does have Roger Clinton, former President Bill Clinton's brother, as the mayor of the town, while former blaxploitation star Gloria Hendry is the town coroner.  There is also a brief appearance by Linnea Quigley and her well-known assets.  It even has decent creature work, this time done by KNB.  Still, it does have Ami Dolenz, and her acting skills are pretty much non-existent.  She's not as bad here as she was in Witchboard 2, but then she isn't given the burden of carrying the lead role.  That falls to Andrew Robinson, who does what he can with the material he was given.
Still, the movie is a departure from the first, rewriting the entire story with Miss Osie obviously being the stand-in for Haggis, but without the menace.  The attempts to humanize Pumpkinhead are also misguided.  The only thing I can say is that many of the deaths look better, but they carry no impact since these are characters that are either introduced right before they get killed or that we have been waiting almost 90 minutes to see them done away with.
There are two other movies, both with Lance Henriksen, that continue the Pumpkinhead brand, but this one doesn't carry the original story forward nor is it really a sequel.  It seems more of a film that Pumpkinhead was slapped into at the last minute, and from what I understand has no impact on the later movies, which don't have any better reputation that this one.  Since Stan Winston pretty much felt he had told the story he wanted to and moved on, it would have been best to have just left this franchise be, as there is nothing here of any true value.
Pumpkinhead II: Blood Wings (1993)
Time: 88 minutes
Starring: Andrew Robinson, Ami Dolenz, J. Trevor Edmond
Director: Jeff Burr