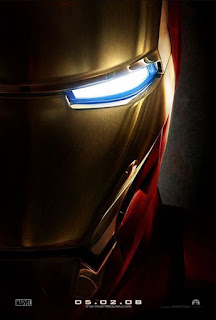 Before we saw the pattern repeated ad nauseum.  Before the idea of an entire Marvel Universe existed.  Before Disney took over.

There was Iron Man.  And, for many, there was also Robert Downey, Jr. suddenly not being a tragic punchline.

Robert Downey, Jr.'s career had begun to recover before Iron Man.  Tropic Thunder came out the same year, and he had both sobered and up and somewhat come to grips with how he was destroying his life.  For me he had been interesting at one point - Natural Born Killers instinctively comes to mind - but for the longest time I found myself being more interested in his dad's weird, independent art films than him.

What we did have with the junior Downey as a millionaire playboy with some major substance abuse problems whose dad had been an innovator of sorts, but who himself at that point had become less of a prodigy even if he did have more to offer than what you saw on the surface.  That his own personal life in some ways mirrored Tony Stark contributed more than a little to this film's success, as people had begun caring about him as an actor again.  It also took over from the only other superhero franchise that had any success at the time, the X-Men series, which had seemingly been killed off with its disappointing third installment.

Tony Stark (Downey) is the head of Stark Industries, an arms manufacturing company started by his father.  Where his dad gets credited with helping to build weapons that helped defeat the Nazis, Stark is known more for his toys getting into the hands of the wrong people.  On a trip to Afghanistan he himself ends up the same way - captured by a multi-national terrorist organization called the Ten Rings, he is forced to build his latest weapon, the Jericho missile, for his captors.  Instead, he manages to miniaturize one of his companies biggest innovations, an arc reactor, to both keep shrapnel from penetrating his heart and to power an advanced suit of armor he uses for his escape.

Back home he begins to improve on both the design of the reactor and the suit, while suspending development and sales of weapons.  This does not go over well with either his assistant Pepper Potts (Gwyneth Paltrow), nor Obadiah Stane (Jeff Bridges), the man who ran the company until Stark came of age.

Stane does become interested in the suit once Stark uses his upgraded model against the Ten Rings, and manages to build his own, larger version.  Stane is also working to remove Tony as head of Stark Industries, and if normal boardroom politics won't do the trick, then he figures his new suit of armor will.

Unlike many of the future Marvel films, Stane is a villain more concerned with his person gain, as well as maintaining his own power, rather than taking over the world.  It's a rather humble beginning, and Jeff Bridges plays the part quite well and with the sort of firm handshake charm of a guy you know is holding a mallet behind his back.  It's a welcome change of pace for a man known for playing good guys or slackers, and Stane remains one of the more memorable Marvel villains.

Robert Downey, Jr. managed to step into a career-defining role in this movie, and he plays Stark effortlessly.  If he's a lot more interesting here than in later films it's because he is still transforming, and the transformation isn't as in-your-face awkward as say that of Dr. Strange.  Seeing the devastation of the products he has made first hand, as well as almost dying from them, quickly breaks down many of the barriers of self-justification he has made for his life - barriers that, given that his playboy lifestyle seems like something he has forced upon himself to maintain that mental distance, were paper-thin to begin with. Stark is human, and farm from indestructible as Iron Man.

This film also introduces Rhodey, played in this movie by Terrence Howard, who is Stark's main liaison with the military.  He would be replaced by Don Cheadle going forward, but still gives some hints as to the character becoming his own superhero in the near future.  Rhodey is mainly along this time to run interference for Stark once he realizes what his friend his up to.

Jon Favreau keeps things fast-paced while still focusing on the main characters.  Unfortunately, he does go wrong in one area: yes, it is cool watching the Iron Monger swat Iron Man with a motorcycle, and the special effects (done by Stan Winston shortly before he passed away) hold up better than many of the current Marvel Films.  However, for so much tension built up between Stark and Stane, there is little payoff when it comes to the final battle.  A few cool scenes, a wrap-up and a quick post-credits scene introducing Nick Fury (Samuel L. Jackson) and setting up everything leading up to the first Avengers movie.  There is so much going on in the film up this point that to suddenly be sitting at the end of two hours going, "So, that's it?" is anticlimactic.

I think that's the reason why, when I first saw Iron Man, I thought it was okay but didn't understand why everyone was tripping over themselves to say what a great film it was.  It was a major gamble for Marvel that paid off better than they ever could have imagined, and it did present the comic in an adult manner without sacrificing the spirit of the original material, but otherwise the abrupt ending undercuts the rest of the movie.  Despite that, there is enough that is good here that the series continued - something that probably would not have happened if they had tried to go forward with The Incredible Hulk instead.