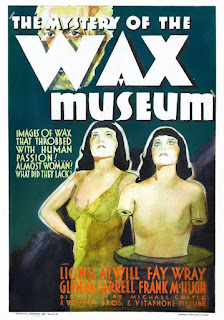 Adding sound to movies wasn't the only innovation in the 1930s.  While the majority of movies were in black and white hand-tinting and other methods of providing color to movies had been around almost from the beginning, going all the way back to George Méliès's A Trip to the Moon.  It was something directors and film companies could do if they wanted, but it was a time-consuming process.
That started to change with the advent of two-strip Technicolor.  Unlike three-strip - which would be used in major movie productions starting later in the decade - the two-strip technique involved combining blue/green and orange/red so that it would give the illusion of numerous colors.  It is a bit strange to modern eyes, as even watching a movie as old as Gone with the Wind or The Wizard of Oz had the three-strip method.  In many ways the two-strip process feels barely a step above black and white.
This means it does lend a certain style to to the movies it was used in, with a number of the flesh tones being exaggerated and many of the shadows still exaggerated.  Before The Mystery of the Wax Museum director Michael Curtiz had made another thriller called Doctor X, using most of the same cast, some of the same sets and the same two-strip process.  While Doctor X is relatively well known, The Mystery of the Wax Museum often sits in the shadow of its remake, House of Wax, from 20 years later.  It didn't help that, until a color print was found in possession of a former CEO of Warner Bros., this movie was available only in black and white.
Ivan Igor (Lionel Atwill) is a master sculptor and takes great pride in his lifelike wax creations.  Unfortunately, his penchant for portraying history instead of the merely ghoulish means that his work doesn't attract the crowds of other museums.  To remedy this his partner Joe Worth (Edwin Maxwell) decides to torch the museum for the insurance money.  In the process Igor is trapped inside.
11 years later Igor is preparing for his opening in New York.  No longer able to use his hands, he relies on various other artists to carry out his instructions, including a young man named Ralph (Allen Vincent).  When Igor meets Ralph's girlfriend Charlotte (Fay Wray) he is amazed by her resemblance to his lost statue of Marie Antoinette, and wishes to have her pose for Prof. Darcy (Arthur Edmund Carewe), one of his sculptors.  Meanwhile Charlotte's roommate Florence (Glenda Farrell), a reporter for the Express, begins to follow a trail of clues regarding the missing body of a socialite that rich playboy George Winton (Gavin Gordon) is accused of killing.  Her investigations, disturbingly, start leading back to Igor and his museum.
Although Fay Wray is billed as the lead actress on this film she plays a minor role as a love interest and a damsel in distress.  The true lead role is played by Glenda Farrell as a hard-boiled reporter for a paper called The Express.  It's a role that normally a man would get back at the time, and besides Atwill's calmly psychotic performance and the great makeup work she is what is most memorable about the film.  Of course, The Mystery of the Wax Museum came out before the Hayes Code and, although it doesn't take that opportunity to show a lot skin, this is a bit more violent and touches on a number of subject that the Code would prevent within the next couple of years.  That is probably how Curtiz got away with portraying what, for the time, would have been pretty much an uncommon role for an actress.
The movie itself does suffer in places from a lack of focus.  The villain is pretty much known from the beginning, so quite a bit of the film is spent piecing together what exactly is going on and why.  It is a strange approach and, in less skilled hands, would have made the final reveal a let-down.  Still, it works, partly because of problems with the makeup that had to be overcome and also because of Wray's reaction.  The other problem is a technical limitation in that the lights used put off so much heat that using wax sculptures was out of the question.  Instead, Curtiz had actors stand as still as possible; unfortunately, some of their blinking and fidgeting made it to the final print.
While Vincent Price definitely was able to ham it up a bit more in the remake, I in many ways prefer Atwill's understated performance as Igor, even if for most he is not as recognizable a horror icon.  In the end, however, this is a unique film for the time, both in its presentation and in some of its characters, and is definitely a must-see for fans of the Vincent Price version.
The Mystery of the Wax Museum (1933)
Time: 77 minutes
Starring: Lionel Atwill, Glenda Farrell, Fay Wray, Allen Vincent, Gavin Gordon
Director: Michael Curtiz