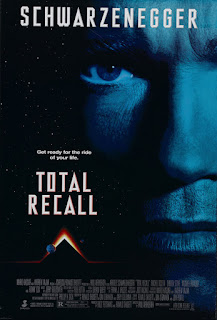 I remember while Total Recall was still in production that the most press it was getting was because of its budget.  There were a number of articles at the time critical of spending what was then an almost unheard-of amount of money on a movie.  Sure, Arnold Schwarzenegger was at his peak, coming out with one hit after another, but Paul Verhoeven was largely known for the low-budget RoboCop (despite an impressive body of work in his native Netherlands).  The buzz was that this would be a major flop.

And it almost was.  The crew battled constant food poisoning (as well as adverse breathing conditions) while filming in Mexico City, and at first Tri Star had no idea how to market the film.  In addition, the MPAA wanted to give it an X rating for the over-the-top violence.  However, Arnold loved it and pushed for it.  In the end, it truly became Verhoeven's major mainstream Hollywood breakthrough, despite the fact there is little mainstream about it other than its star.

Douglas Quaid (Schwarzenegger) is a construction worker whose wife Lori (Sharon Stone) is concerned about his constant dreams of Mars, which include visions of a brunette (Rachel Ticotin).  Unable to convince Lori to even consider moving there, he decides to try out a virtual travel service, called ReKall, that he sees advertised on the subway.  ReKall offers the experience of traveling to exotic places by implanting virtual memories, promising the perfect vacation, with options in which you can also role play during your "stay."

Quaid decides to pay the money for a trip to Mars with the added option of playing the part of an undercover secret agent.  Once hooked up to the machine and given the implant, though, it is discovered that he has had his memories purposely erased at some point and the ReKall implant has resulted in a "schizophrenic embolism."  The lab technicians try to restrain him, but he escapes and heads home.

Outside his apartment building he is confronted by fellow construction worker Tony (Dean Norris), who had previously warned him not to go to ReKall.  Turns out Tony was sent to keep an eye on Quaid and make sure his memories did not return.  Tony attempts to kill Quaid and, failing so, results in Richter (Michael Ironside), a strongman for Mars's dictator Vilos Cohaagen (Ronny Cox), to attempt to kill Quaid as well.  Richter has another stake as it turns out that Lori is not really Quaid's wife, but Richter's girlfriend, and was assigned by Cohaagen to simulate a happy married life.

Quaid escapes Richter and is contacted by a man who gives him a suitcase.  After finding an isolated place, he opens it and finds a recording of himself.  He is told he is really Hauser, the head of security for Cohaagen, and that he decided to side with the mutant rebellion led by the mysterious Kuato against Cohaagen's rule.  He must get to Mars, contact Kuato and find out why the Pyramid Mines were shut down, which is rumored to be that alien technology has been discovered.

After making it to Mars Quaid still finds himself pursued by Richter.  He escapes with the aid of cab driver Benny (Mel Johnson Jr.) and reaches his contact, Melina, who is the brunette from his dreams.  She agrees to help him meet with Kuato.

Back at his hotel, Quaid is confronted by Dr. Edgemar (Roy Brocksmith), who informs him that he is experiencing a psychotic breakdown and that nothing he is experiencing is real.  He is given the chance of returning to reality, with the warning that if he kills Edgemar that reality will cease to exist for Quaid and there will be no choice but to perform a lobotomy on him.  To reinforce this, Lori is brought in to convince him to return.

Quaid makes the decision to stay, and as the rest of events play out exactly as Edgemar outlined, the question eventually becomes whether he is trapped in a reality of his (and ReKall's) making, or if he has truly fulfilled a greater purpose.

Although based quite liberally on it, Total Recall is an adaptation of Philip K. Dick's "We Can Remember It for You Wholesale".  It works as a framework, but what really makes this movie work is the wonderful miniatures, practical effects and garish colors.  It is unfortunate that Paul Verhoeven made Showgirls, as that monument to horrible film making gets most the attention.  In many ways Verhoeven is most at home with comic-book style science fiction, and having started outside of Hollywood is a major benefit.  I would say the sets he uses in Total Recall quite heavily give me an idea of what Mario Bava would have been able to do with a similar budget.  They are quite dissimilar, but a lot of the way this movie looks and flows reminds me of Danger Diabolik!.

While there was never any danger of Arnold Schwarzenegger becoming the next Laurence Olivier, the truth is by this time he had learned how to properly deliver dialogue and lines so that his characters could be halfway believable.  It is great seeing him more in a compromised position than as a super action hero, although he does become somewhat of one later on - but that's largely in line with the plot of the movie and some of the questions it brings up about whether or not he is living out reality or a fantasy.

One last thing to say - if you're going to have women doing martial arts moves and fighting, take a lesson from this movie.  Sharon Stone spent a lot of time getting into shape to where it would be believable that she could be the undercover agent and expert fighter that Lori turns out to be.  You don't get that way on wheatgrass smoothies and a raisin a day to maintain that 100-pound frame.