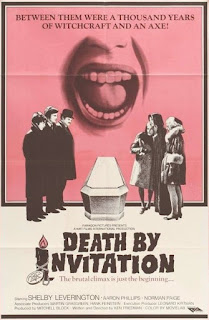 When I saw the poster for this and heard the plot I was expecting something along the line of a William Castle film where people are brought to a location and slowly offed in a gimmicky way.  It promised an axe-wielding witch getting revenge for crimes perpetrated upon her ancestors (or possibly on her previous incarnation, or on her, or something).

I can definitely say this is not a slasher movie, but it is a revenge film.  The problem is it typically takes too long to get where it's going, and neither the title nor the description really have much to do with what's in the movie.

In the 1600s a witch (Shelby Leverington) is burned at the stake, largely based on testimony by the head of the Vroot family (Aaron Phillips).  Three centuries later Lise (Leverington) is a woman living in New York who is either the ancestor or reincarnation of the witch that was killed (it's never really stated clearly), and Peter Vroot (Aaron Phillips) is a successful businessman.  Lise becomes friends with the family and also catches the attention of Jake (Norman Parker), who not only becomes enamored with Lise but also manages to impress Peter, who offers him a position.

Meanwhile Peter's son Roger (Denver John Collins) also falls for Lise, and she has him meet her at her apartment.  When he arrives, she tells him the story of a tribe of women who ruled over the men until one man became strong enough to lead on his own and was ritually murdered by the women so they could keep their position.  She then murders him.

Peter is understandably upset by his son's disappearance and by the police refusing to do much, other than hinting he has probably got into drugs.  While he grieves for his son, the rest of his family begins to shrink as Lise kills his daughters.  Jake, unaware of what Lise is up to, continues to pursue her, despite the fact that she has the same fate planned for him as Roger.

There are a couple of good scenes.  Elly Vroot's (Lesley Knight) death and her younger sister's witnessing Lise in the act lead to an interesting double homicide set-up, while there is a good bit of atmosphere building up to Roger's death (although Lise's speech goes on way too long).  There is a rather humorous scene between Jake and Peter at the office with Muzak drowning out their attempts to come to an agreement on what position Jake should have.

Largely, though, nothing happens, and what does happen has been done better in many Roger Corman and Hammer films.  It is not bad for what it is (a regional, privately financed film), and it's suitably obscure, but it's not an unsung classic.