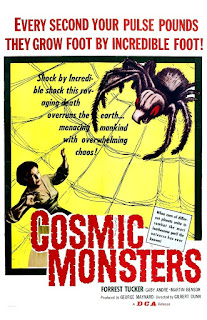 British sci-fi films are never without some interesting ideas.  The problem is, as fans of classic Doctor Who and Quatermass can attest, sometimes big ideas can't overcome the fact that you have crepe paper, fingerpaint, some duct tape and a couple hundred pounds from the petty cash drawer in order to make the movie.  I think that is why I like so many of the British sci-fi and horror films.  When you are tasked with doing something grand on the budget of an elementary school Christmas play, you get inventive.

I definitely wouldn't say The Cosmic Monster is anywhere near the best I have seen when it comes to British science fiction films, but it does try harder than many of its American counterparts.  At least there's an actual movie here instead of 20 minutes of narration and stock footage.

Dr. Laird (Alec Mango) is experimenting with altering magnetic fields in order to change the molecular structure of metals.  When one of his experiments ends up injuring his computer programmer, Michele Dupont (Gaby André) is brought in.  Laird's other assistant, Gil Graham (Forrest Tucker) at first is as skeptical as Laird about having a woman on the team, but quickly warms up to her when she finds a way to make the computer more efficient, thus making Laird's experiments more effective.

Initially urged on by Brigadier Cartwright (Wyndham Goldie) after seeing the defense possibilities, Laird's experiments end up being much more effective than he originally thought.  A localized disruption of the ionosphere causes a local vagrant to go mad and assault one woman and later kill another, while a number of insects in the local forest begin to grow to outlandish sizes and attack the local population.

Laird's experiments also attract another unlikely visitor.  Mr. Smith (Martin Benson) suddenly shows up in town asking some pointed questions, and seems to know quite a bit about the experiments Laird is running.  It turns out he is from Planet X, which has been observing and studying our world, and has arrived to stop Laird's work.  Unfortunately, Laird himself has become quite insane, shooting the bureaucrat in charge of overseeing his operation and locking all others out of his lab as he prepares an even larger, more dangerous, demonstration of his machine.  With Smith's help, it is up to Graham, Dupont and the military to put a stop to it.

As can be expected the giant insects are largely closeups of regular-sized insects superimposed with other backdrops or matte paintings.  There are a few uses of prop insects, including one rather shocking (for the time) attack on a soldier.  The attack on the schoolhouse is also rather well-done, and the cast is solid throughout.

What is slightly different from other giant bug movies at the time is that it is made quite clear that radiation has nothing to do with it, but rather the disruption in the ionosphere causing cosmic rays that are usually filtered out to affect life on the surface.  It's no more scientific than gamma radiation causing huge mutations (there are many reasons why, with our current atmosphere, insects are limited in size), but at least its nice to see they didn't go back to the same old well.  Also, the bugs, though they become the central action part of the movie, are less the focus than the fact that we have alien benefactors looking out for us.  No threats of destroying Earth, no prime directives, no ulterior motives - Smith just shows up to lend a hand like a good neighbor.

Again, we're not talking about much beyond the normal b-movie, but at least it raises a few questions and follows its own path.