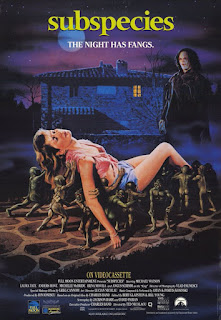 One of the most difficult things to do is to come up with anything new with the old-school monsters, particularly vampires.  Every few decades someone does, whether it be sexually ambiguous depressed bloodsuckers from Anne Rice, action films like Blade or Underworld or even another attempt to update Dracula.  Whenever something new does come out just about everyone tries to copy it.  Vampires always seem to come back because they often represent something both alluring and frightening for everyone.  For women it's a kind of forbidden romance, for men it's a dream of the power one would have with immortal life.
Though it has developed its own cult following Subspecies has long been an outlier, even though Ted Nicolaou's tale of the evil vampire Radu (Anders Hove) and the efforts to do away with him has endured to the point where a prequel is scheduled for release in 2023.  They have all been directed, and many written, by Nicolaou, which is not bad for a series that started as one of many direct-to-video films released by Charles Band's Full Moon brand in the early 1990s.
King Vladislav (Angus Scrimm), despite being a vampire, is getting ready to pass his power to his favorite son.  Unfortunately for Radu, that's not him, but he's not concerned with such niceties.  Rather, he kills his father and claims a relic called the Bloodstone, which contains the blood of all the martyred saints, as his own.  The stone itself is meant to sustain the vampires so that they do not attack the people in the nearby villages per a truce that was made in the 15th century, but Radu is not satisfied and wants to roam the countryside feasting on humans and turning them into the undead.
Michelle (Laura Mae Tate) and Lillian (Michelle McBride) are American students that have come to Romania to look into the old legends with the help of Mara (Irina Movila), a fellow student and native Romanian.  Staying in the fortress that the vampires protected centuries before, they meet a fellow researcher named Stefan (Michael Watson), who appears to be good friends with the fortress's caretaker Karl (Ivan J. Rado).  The girls unwittingly become the targets of Radu, leading Stefan to reveal his true identity as Vladislav's successor in order to protect them and end Radu's plans.
Subspecies was based on an idea by Charles Band that was fleshed out by Jackson Barr and David Pabian, but Ted Nicolaou is the one that brought it to life.  A frequent director of low-budget horror for Band's Full Moon Features, Nicolaou did something unique with Subspecies, which was to take the advantage of the fact that Romania had recently overthrown its long-time communist dictator and started to open up to the West.  A number of Full Moon productions followed suit, but Subspecies was the first, being both the first American film made there as well as the first western vampire film to be made there, despite Transylvania being pretty much the heart of the Dracula myth.
The advantage was the ability to do location filming in ruined medieval castles rather than having to spend the money on large sets.  Nicolaou also used local actors and extras as well as crew for the film.  Stop-motion puppets, originally conceived for a separate movie called The Subterranean, were used for the movie's namesake - miniature imp-like creatures that are grown out of Radu's blood and do his bidding.  As for their star vampire Anders Hove is made up with corpse paint and long, thin fingers.  There a number of references to Nosferatu, as in the placement of the vampires' teeth and their ability to travel through shadows.  Hove's performance is definitely one of the highlights, constantly dripping blood from his mouth and looking nothing like his more human father or brother.  For that matter Angus Scrimm, who is top-billed, is only in the movie for a short time at the beginning.
Although he's the good guy Stefan is rather a boring hero, and in fact his friend Karl is a lot more useful.  There's a reason why Lauren Mae Tate is the protagonist.  Even though she doesn't exactly stand out as an actress she's a lot more interesting as a protagonist than Michael Watson could be.
With a little more effort, and a little more money - at least enough to make the subspecies match better with their surroundings - this series could be better known.  Still, Band wasn't aiming for theaters with this and many of the other movies he produced at the time, but for the home video market, where his profit margin was a lot larger.  Despite that the movie is lot more satisfying that some of the flashier films that came later in the decade, and much more true to the actual legends.
Subspecieis (1991)
Time: 83 minutes
Starring: Anders Hove, Laura Mae Tate, Michelle McBride, Irina Movila, Michael Watson, Ivan J. Rado
Director: Ted Nicolaou