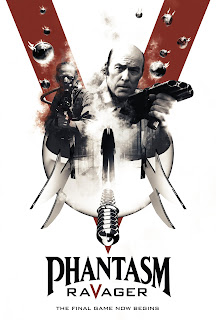 Finally, after 36 years, the Phantasm series came to an end.  This is the point where everything is finally explained, from the Tall Man (Angus Scrimm) to the dwarfs to the gravediggers, and why Earth of all places.  Why did Michael (A. Michael Baldwin) have a gold sphere in his head and why did the Tall Man try to make him one of his kind?  Is Jody (Bill Thornbury) good or evil, or neither - just a tool of the Tall Man?  Will Reggie (Reggie Bannister) ever get laid?  Well, all will now be revealed.
Just kidding.  It is a Phantasm film, after all.
At the end of Phantasm IV: Oblivion, Reggie and Michael blow up a hearse, taking the Tall Man with it.  However, another iteration appears through the transport forks and, with Jody's help, cuts the sphere from Michael's head, leaving him to die.  Some time later Reggie is wandering the desert and, after retrieving his Hemi Cuda from a thief, finds himself pursued by two of the sentinel spheres.  Just as he defeats them he finds himself sitting outside a nursing home with Michael.  It turns out Reggie has been diagnosed with dementia and Michael, feeling an obligation toward him, is there to be with him in his final days.
Still, Reggie remembers his escape from the desert clearly, including picking up a woman named Dawn (Dawn Cody), whom he takes back to her home, which is attacked by spheres.  Upon leaving he passes through one of the gateways, once again meeting an iteration of the Tall Man who gives him a choice: give up the pursuit of Michael and Jody and the Tall Man will return Reggie's family to him.  Reggie of course continues the fight, soon waking up in a future where the Tall Man and his minions have won, and where Michael is leading the remainder of humanity in the fight.
If anything Phantasm: Ravager tries to outdo the original when it comes to being rather unclear on what is and what is not real.  Throughout the action that may or may not be occurring Reggie constantly returns to the nursing home in various states of deterioration and disorientation.  If anything it mirrors the ending of the British series Life on Mars, where it in some ways makes it clear what the reality is and in others makes the rest of what is happening seem just as real, if not slightly more.  The mid-credit sequence without Reggie initially present, involving a freedom fighter named Chunk (Stephen Jutras) and a return of Rocky (Gloria Lynne Henry) from Phantasm III: Lord of the Dead further muddies the waters.
In terms of quality Ravager is the least of all the films in the series.  It has the lowest budget since the first and, adjusted for inflation, honestly would be considered lowest period.  Despite that some of the effects are well done while others are too ambitious for the budget they have.  It was originally intended to be a series of webisodes following Reggie's exploits after the fourth film, but eventually evolved into being a feature film, with original writer/director Don Coscarelli cowriting with director David Hartman.  Hartman had worked with Coscarelli on Bubba Ho-Tep but is better known as an animator.
Despite many of its problems I still found this movie to be a lot better than most fans and critics gave it credit for, although it really wasn't necessary.  The fourth movie, though it had a downbeat ending with Michael supposedly dying and his last thoughts being riding in an ice cream truck with Reggie back in 1979, worked.  This, depending on what one believes is reality, either finalizes things once and for all or leaves it open for sequels that, this time around, we know will never be made.
Although Phantasm as a series has never been profitable, the first movie was enough so that it let Don Coscarelli have the film career he wanted.  Despite this it developed enough of a cult to sustain five movies, which means at some point someone is going to get the notion to reboot, reimagine or remake the first film.  Unfortunately, they will be under so much pressure to make a movie that makes sense that it will end up being a by-the-numbers fright film or, if the writer or director decide they have a "vision," go too far off on the dream aspect as Ravager almost does.  Either way, it would have been nice for Coscarelli to return once more, since he has a better eye for composition than Hartman, and it was his baby after all.  Ravager may not be the satisfying end that Oblivion was, or that the original ending of the third movie would have been, but it's still an enjoyable enough send-off for the series.
Phantasm: Ravager (2016)
Time: 85 minutes
Starring: Reggie Bannister, A. Michael Baldwin, Angus Scrimm, Bill Thornbury, Stephen Jutras, Dawn Cody
Director: David Hartman