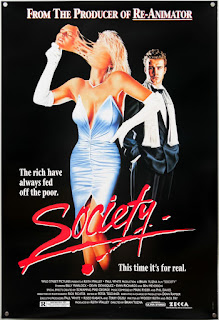 Re-Animator and From Beyond have become cult classics, but they were a means to an end for director Stuart Gordon and producer Brian Yuzna.  While they certainly enjoyed making them and were in no way embarrassed by them - Re-Animator was something Gordon had been trying to get made for a long time - they were meant, like many independent films, to get the notice of larger studios.  Their gambit worked, and no less than Disney hired them to make a blockbuster family film, which turned out to be Honey, I Shrunk the Kids.  Gordon and Yuzna wrote the script, and Gordon was set to direct.  Unfortunately, while scouting locations in Mexico, Gordon took ill.  With Gordon unable to fulfill his directing role Yuzna was fired as well.
This was Brian Yuzna's first, and only, attempt at working for a big studio.  Disgusted with the treatment he continued to work on another project he had been developing called The Men, in which women suddenly realize that every male on Earth is an alien.  It never worked out but, when handed a new script by Zeph E. Daniel and Rick Fry that parodied class division in the United States, he was able to rework some of his ideas to go along with their script, thus producing Society.
Bill Whitney (Billy Warlock) is the son of an upper-class family in Beverly Hills.  However, he feels that he doesn't belong with them, especially when he starts noticing alarming behavior in his father Jim (Charles Lucia), his mother Nan (Concetta D'Agnese) and his sister Jenny (Patrice Jennings).  Though he is seeing Dr. Cleveland (Ben Slack) about his doubts, they are seemingly confirmed by his sister's ex-boyfriend David Blanchard (Tim Bartell), who presents Bill with a disturbing recording of Jenny's coming out party.
He gives the tape to Dr. Cleveland and, after trying to get another from Blanchard, finds out that David has been killed in a car accident.  When he confronts popular kid Ted Ferguson (Ben Meyerson) about the tape, Ted pretty much admits to everything, and it soon becomes clear that whatever is going on his family are not the only ones involved.  Bill soon begins to get involved with one of Ferguson's gang, Clarissa (Devin DeVasquez), who also develops feelings for him.  Meanwhile, Billy's best friend Milo (Evan Richards) soon witnesses enough that he realizes Bill is not going crazy.  Whatever Bill is thinking, however, it turns out that the truth of the matter is much, much worse.
Despite the big hair, the dated music and the obvious technology gap, Society is a movie that has survived the test of time because, unfortunately, the issues at its heart still remain unaddressed.  While it had moderate success in Europe upon release, Society didn't hit American theaters until 1992, at which time the movie failed miserably.  It wasn't until almost a decade later that it was reappraised and became a cult favorite.  Despite that it fits in with a number of movies throughout the 1980s that dealt with class struggle, often portraying the rich literally preying on the poor.
While Society is best known for heading into pure Cronenberg territory at the end, with a bevy of great practical effects from Japanese effects master Screaming Mad George, the majority of the film is a slow burn working up to the reveal.  That is probably one of the best things about it, because dropping hints about what is going on rather than revealing everything right at the start works much better.  The effects at the end are great, but any impact they would have had, and that the final revelation (and punchline) the movie has, would have been irrevocably ruined by going for the level of excess most contemporary horror films did.
Billy Warlock, for his part, does a good job with the role of Bill, keeping viewers on edge as the conspiracy plays out.  Ben Slack almost steals the show at the end, while Evan Richards, who is supposed to be Bill's best friend, is absent a good portion of the film.  Devin DeVasquez is one of the weaker parts of the film, but she does get one of the best lines and was definitely hired for reasons other than acting experience.  Pamela Matheson plays Mrs. Carlyn, Clarissa's zombified, hair-eating mother whose behavior, though it seems like it may be integral to the plot somehow, is never explained.
This was Brian Yuzna's solo directorial debut and it is obvious he took a lot of inspiration from Gordon's approach.  When it comes to actually showing the more disgusting parts he doesn't turn the camera away.  While this has sort of a Hitchcockian build-up I do give Yuzna credit for not being tempted into using Hitchcock's camera and narrative tricks, but instead referencing John Hughes more than anything by presenting most of the movie as an '80s teen comedy gone wrong.  Again, there are hints, and all of them contribute except for Mrs. Carlyn, but one of the best things about Society is that it is not filmed and paced like a horror film until the horror actually arrives.
While it is definitely an impressive and overlooked piece of low-budget filmmaking it is still far from perfect, sometimes in pacing and often in acting.  However, it doesn't belabor the points it makes about class division, instead choosing to save it for when it counts.  I can understand why it did not do well in 1992, as the movie would have looked dated even then. I don't think he considered that he was making a movie that would still be relevant over 30 years later, but this little movie has proven to have more influence and impact over the years than Honey, I Shrunk the Kids.  Still, I'm sure he would still have loved to have had a bigger cut of what that film made.
Society (1989)
Time: 99 minutes
Starring: Billy Warlock, Evan Richards, Devin DeVasquez, Ben Meyerson, Ben Slack
Director: Brian Yuzna