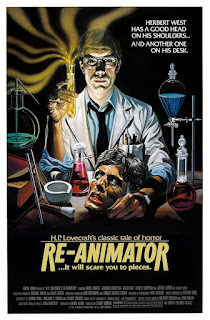 For the longest time H. P. Lovecraft was treated as an also-ran to Edgar Allen Poe.  Since he was American, wrote horror stories and largely stuck with the short story format, the comparison was often made, although their stories and the men themselves couldn't be more different.  Poe dealt with tangible fear, often with narrators who were already unstable or who were suffering a great loss.  Lovecraft, on the other hand, often wrote about more intangible ideas, largely that of a universe indifferent to the beings that live in it, and horrors that could drive man mad at a glimpse.
Understandably Poe was the better choice for translating to cinema.  While his stories were short and to the point directors like Roger Corman famously fleshed them out when adapting them.  Lovecraft often dealt with monsters, something that, outside of science fiction stories, often translated clumsily, and his monsters were barely even described in his own stories.  There was already Godzilla stomping around Tokyo, so what was a movie studio to do with Cthulhu or Nyarlathotep?  There were attempts - Die, Monster, Die! adapted "The Colour Out of Space", while there were several versions of "The Dunwich Horror", or inspired by it.  Still, it wasn't until the 1980s, when a loose adaptation of his Lovecraft's serialized short story "Herbert West - Reanimator" arrived on the big screen in 1985.
Dan Cain (Bruce Abbott) is a medical student with a bright future.  He's engaged to Megan (Barbara Crampton), the daughter of Dean Halsey (Robert Sampson), and is one of Miskatonic's star pupils.  Things change when a new student, Herbert West (Jeffrey Combs), arrives at the school after studying abroad and rents a spare room from Dan.  West's behavior is adversarial to almost everyone, especially Dr. Carl Hill (David Gale), a noted brain surgeon.
West's delight at Cain having a basement is due to the fact he has his own experiments to run.  He has developed a re-agent that can resurrect dead tissue, and is eager to try it out if he can get his hands on fresh corpses.  Dan is reluctant to help at first, but begins to work with West after Halsey expels both of them for even suggesting the idea.  Unfortunately, due to the violent nature of those revived by West's re-agent, things soon get out of control - particularly when Hill, who has an unhealthy obsession with Megan, becomes one of the test subjects.
Director and co-writer Stuart Gordon first wanted to turn his version of Herbert West - Reanimator into a television series.  An entire season-long script was prepared, and he largely chose the story because of its resemblance to Frankenstein, of which Lovecraft meant the story to be both an homage and a parody.  It was unlike most of the writer's work, and he did it largely because he got paid decently for the time for writing the different parts of the serial.  Gordon originally intended the show to be set in the same time period and filmed in black and white.  However, producer Brian Yuzna convinced him that he should instead make it into a movie.  To cust costs it was brought into the modern day, and a cast of mainly unknown actors was assembled to make it for a budget of $900,000 dollars.
Re-Animator looks like a movie with a much higher budget, although when examined closely - occasional flimsy sets and no exterior shots save a couple establishing ones - one can kind of see where the corners were cut.  It definitely was not with the effects, as this contains some of the best practical effects of the time, particularly with Dr. Carl Hill's body transporting his head - no longer on his shoulders - wherever he goes and, in the movie's most infamous scene, putting it someplace it definitely does not belong.
Both Robert Sampson and David Gale were veteran actors, with the latter playing the part of Hill when Gordon and Yuzna couldn't get Christopher Lee.  In most cases Gale, who manages to be both over-the-top and subtle at the same time, would be the most memorable actor in the film.  That would be if a newcomer, Jeffrey Combs, wasn't playing the part of Herbert West.  Combs can play subtle - he often did on his characters in various Star Trek series - but he first got noticed in Re-Animator, having some of the best lines (corny, campy, but often intentionally humorous) and not just chewing, but devouring, the scenery.  Bruce Abbott, who was supposed to be the leading man, gets left behind in all this, but it's not really Combs's fault; it's either the way Dan Cain is written or Abbott himself, but he's the least interesting part of the film.
The other great newcomer is Barbara Crampton.  Not only is she a decent actress but she seems game for about anything as long as she's comfortable and things are kept professional, which is unique in a movie like this where pretty much everything goes.  It is amazing that she agreed to do the scene that she is most famous for but, by all accounts, she was pretty much the one in control of how her body was shown and for how long, as well as how far things went.
This has long been one of my favorite examples of horror in the 1980s, in which the latter half moved beyond slasher films and into movies where just any idea, for better or worse, ended up on the screen.  The only weak part of the movie is toward the end, as Hill's control over other reanimated corpses isn't fully explained - an entire subplot involving Hill being an expert mesmerist was excised, clumsily, by Yuzna to bring the time down - but with a bunch of dead people fighting our protagonists, it doesn't matter too much.  Re-Animator has stood the test of time in story, effects and its ability to shock.
Re-Animator (1985)
Time: 84 minutes
Starring: Bruce Abbott, Jeffrey Combs, Barbara Crampton, David Gale
Director: Stuart Gordon