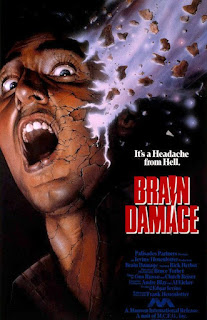 Frank Henenlotter has never been the most prolific filmmaker.  I honestly don't know if that come down to budget or a habit of not using all his ideas at once.  I'm thinking it's a bit of both, since a good portion of his non-documentary career involves Basket Case and its sequels.  Still, there are some other movies that he has done that have had a pretty decent cult status as well.
I had heard of Brain Damage for a long time, as it had been mentioned as being one of those disgusting little nasties with some scenes that took things too far.  Unfortunately, I confused it with Brain Dead, a movie starring Bill Pullman and Bill Paxton that, despite its two stars, is just plain horrible.  It's meant to be a comedy and, while watching it, I was waiting for something truly outrageous or gross to happen.  I figured out about halfway through that I had watched the wrong film, which is a reaction I would have had no matter what my intentions.
Brain Damage, however, lives up to its reputation.  Most of it isn't even that disgusting for body horror, which this pretty much falls under, as David Cronenberg often went further in his movies.  There is, however, one scene that, like in Basket Case, the rest of the crew decided was too much and they were not about to stick around for it.  Even though it does push the envelope it still doesn't truly define how strange this sophomore effort by Henenlotter really is.
Brian (Rick Hearst) isn't feeling well so he decides to sit out a concert, sending his girlfriend Barbara (Jennifer Lowry) off with his brother Mike (Gordon MacDonald).  While trying to sleep off whatever he has he starts having a euphoric hallucinogenic trip.  This turns out to be due to a talking brain parasite that has decided to make Brian its new host.  It promises him a carefree life of nice trips in exchange for taking it for a walk.
The reason it needs a host is so it can get out and get to human brains.  The creature, called the Aylmer, has grown tired of eating the animal brains supplied by its previous caretakers and has decided to use Brian to get what it really wants.  When Brian finds out he's being used he tries to resist the pull of the "juice" that the Aylmer secretes, but finds the withdrawal too much to stand.  Still, even though his own efforts may be in vain, he may have no choice if he wants to protect Barbara or himself, especially since former hosts Morris (Theo Barnes) and Martha (Lucille Saint-Peter) will do whatever they can to get the Aylmer back.
There was a six-year gap between Basket Case and Brain Damage, long enough for Henenlotter to benefit from the midnight showings and video sales of his first film.  Thus, though still made on a shoestring budget, he is able to stretch out a bit more.  There are some dreamy scenes as well as some well-done gore effects, even if some of it looks kind of cheesy.  The cheesiest part is the Aylmer itself, largely due to the eyes.  Otherwise it is not a bad puppet, looking like a revolting mix of fecal and phallic matter.  The expected humor is still there, as the Aylmer's voice, provided by horror host John Zacherie, has a sort of Mel Blanc cartoonish quality and even does a bit of a musical number.
This is still a movie largely made up of unknowns, with Beverly Bonner and Kevin Van Hentenryk showing up for cameos.  Thus, like Basket Case, the acting is all over the place, although when Hearst really gets into playing the junkie he's good at the physical acting and portraying the pain he is going through; he's just not that versed in line delivery, even if he is better than his costars.
Frank Henenlotter has said that much of the inspiration for the movie came from his experience of kicking his cocaine habit and the withdrawals that came with it.  There are allusions to drug abuse throughout, with many of the scenes exaggerating (but not by much) the lengths people will go to get their next fix.  The allegory is heavy-handed in places, but it is still handled with enough strange humor, and with enough detachment from reality, that it works well as a horror even without any further subtext.  I think the only reason it is not as well-known as Basket Case or Frankenhooker is it doesn't have the filthy sense of realism of the former, nor does it go for the full-on comedy of the latter.  It is still, like most of his films, much better than it ever should have been.
Brain Damage (1988)
Time: 84 minutes
Starring: Rick Hearst, Jennifer Lowry, Gordon MacDonald
Director: Frank Henenlotter