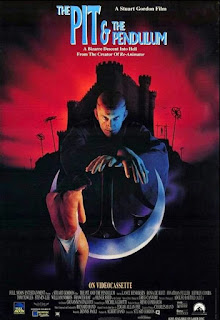 While his career featured a number of films in different genres - although he often returned to horror - Stuart Gordon is known for his H. P. Lovecraft adaptions.  It's almost the opposite of Roger Corman, known for his series of Edgar Allen Poe films in the 1960s.  In 1964 Corman made The Haunted Castle, a version of Lovecraft's "The Case of Charles Dexter Ward", and it was his only deviation between the two writers.  Gordon never made as many Lovecraft films as Corman did Poe, but he did something similar to change it up a bit.
"The Pit and the Pendulum" is a rather simple story, like most of Poe's, involving a prisoner of the Spanish Inquisition experiencing a number of tortures, leading to the titular device of a pendulum blade that slowly lowers towards its victim until they are sliced in half.  It's brief, and is in any case one of Poe's minor works, but it was adapted by Corman in 1961 with Vincent Price, John Kerr and Barbara Steele.  It bore little resemblance to Poe's story except at the end.
Gordon, rather than remaking Corman's movie, decided to go in a completely different direction.  It still has the important element of the pendulum toward the end, but instead emphasizes the tortures and inhumanity of the Inquisition itself while adding in a supernatural twist and making a mad, obsessive villain of the infamous Grand Inquisitor Torquemada.
Antonio (Jonathan Fuller) and Maria (Rona De Ricci) are a couple that run a bakery in Toledo, Spain, in the 15th century.  Maria is a devout Catholic and Antonio not so much, but both agree that the Inquisition is too brutal.  Unfortunately, they have to make money, and one of the biggest gatherings in Toledo is the auto-da-fé, where the heretics are publicly executed.  They have no intention of actually going, but Maria is swept away by a crowd and, after Antonio catches up with her. they are forced to remain and watch.  When she has pity on the latest victim Maria catches the eye of Torquemada (Lance Henriksen), who accuses her of being a witch.
While Maria is humiliated and tortured Antonio tries to find some way to free her.  Meanwhile, Torquemada becomes obsessed with Maria and decides he wants her for himself.  By a strange coincidence she is put in a cell with an actual witch named Esmeralda (Frances Bay) who starts bringing out certain powers that may help her escape her tormentors.
While Jonathan Fuller may be the hero this is definitely Lance Henriksen's film.  Even Jeffrey Combs, in a small part as Francisco, who keeps records of the tortured, knows to hang back and just let Henriksen have his way.  From his strangely tonsured hair to his hunched movements - recalling of all things traditional portrayals of Richard III - he makes sure that Torquemada has no redeeming qualities at all.  Fuller, of course, gets to be the one tied down for the famous pendulum scene, but that's really as far as he is memorable.
Rona De Ricci is the big surprise, and it is too bad that her acting career ended here and the rest of her life, until her suicide in 2020, was filled with abuse and depression.  While Henriksen never seems like he's too good for anything - he'll take on any role if the pay is good enough - De Ricci is definitely too good for this movie.  She deserved a lot more, and unfortunately it was during rehearsals for her interrogation scene that she became uncomfortable with many of the other male actors and with Gordon himself.
As for the movie, it's not too bad for what it is.  Filmed in Italy and putting its castle location to great use it at least looks, like a lot of Stuart Gordon films, looks a lot grander than it actually was.  It incorporates elements of other Poe stories, such as "The Cask of Amontillado" (with Oliver Reed making a short appearance) and "The Premature Burial".  It's certainly bloody enough when it has to be, but it does feel like Gordon wanted to go off in too many directions and tried too hard to make sure his movie would not be compared with Corman's.
This version of The Pit and the Pendulum did have a limited theatrical release, but it is largely known as one of the better films from Full Moon in its prime.  I think I enjoyed it more when it came out, largely because it had real production values and didn't seem like absolute dreck.  It's still entertaining enough, and it's a nice deviation, but it remains one of his more minor films.
The Pit and the Pendulum (1991)
Time: 97 minutes
Starring: Lance Henriksen, Jonathan Fuller, Rona De Ricci
Director: Stuart Gordon