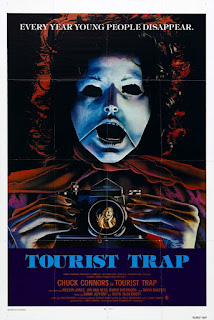 Occasionally something from the dark recesses of my memories will bubble up when I watch an old film.  With Tourist Trap it is the opening, where a metal pipe impales a guy and blood starts dripping out the back.  I never saw the rest of the movie past that point and couldn't remember if it was Tourist Trap or Funhouse.  So, since I'm reviewing this film, that mystery is finally solved.
The bigger mystery with Tourist Trap is what exactly is going on the entire movie.  The killer has telekinetic powers and an obsession with mannequins and wax sculptures, and unfortunately it isn't too hard to figure out the reveal, but writer and director David Schmoeller obviously took a page from his time with Alejandro Jodorowsky and Luis Buñuel and often comes up with scenes that, though they look good, simply don't make much sense.  It is pretty much a template for the modern slasher - closer to Friday the 13th than it is to Halloween - but leaves one to wonder what type of ergot got into those Dr. Peppers Chuck Conners keeps handing out.
After Woody (Keith McDermott) disappears after going to get air in a spare tire, Jerry (Jon Van Ness), Becky (Tanya Roberts) and Molly (Jocelyn Jones) give his girlfriend Eileen (Robin Sherwood) a ride to try to find him.  This leads them to an abandoned roadside attraction, a museum featuring mannequins and wax figures owned by a Mr. Slausen (Conners).  He offers to help Jerry fix his Volkswagen Type 3 (referred to as a Jeep a number of times) after it mysteriously stops working when it is on the property.
Meanwhile, the three ladies are told to wait in the museum, but Eileen gets curious about a nearby house.  She doesn't come back, so Molly and Becky go to look for her, with Becky entering the home as well.  It turns out the home is occupied by Slauson's brother Davey, who wears a series of wax masks and has has a penchant for capturing travelers and taunting them using his telekinetic powers before eventually adding them to his collection.  While planning to do similar to the rest, it turns out Davey has special plans for Molly.
Supposedly Chuck Conners decided he wanted to wind down the latter part of his acting career by becoming, as he stated, the Boris Karloff of the 1980s.  After Jack Palance and Gig Young turned down the role Conners leapt at it.  Unfortunately audiences at the time weren't leaping to see it; slashers hadn't become established yet and, despite some similarities (and sharing an effects team) with The Texas Chain Saw Massacre, audiences just weren't interesting in seeing Chuck Conners in a low-budget horror flick.
That's too bad, as he is definitely the highlight in this movie.  Stephen King thought that Tourist Trap worked despite Conners's involvement, but it really needed someone with his experience to center what is quite a messy - and not in a bloody way - horror film.  Schmoeller, as stated before, studied with some of the greatest surrealistic directors in cinema history, and one can't blame him for showing this off in some of the plotting, particularly toward the end.  On the other hand, much of the story is so generic, even at the time when the whole masked slasher and "final girl" rules hadn't been run into the ground.  Unpredictable things happen throughout, but unfortunately the main plot is as predictable as they come.  Since one can figure out the true identity of the killer even before the main killings start it takes someone with Conners's strengths to still keep things interesting.
That he does, using his strange powers to literally bring many of his dolls to life.  It also means that it's the small episodes in the movie that make it memorable - the opening kill, a seeming conversation between figures meant to resemble the senior Slausons or a ghostly, silent figure providing succor to Molly - are what helps carry this.  Otherwise, it's a by-the-numbers horror film with a big-name star as the hook, and not a whole lot else.
Tourist Trap (1979)
Time: 90 minutes
Starring: Chuck Conners, Jocelyn Jones, Jon Van Ness, Tanya Roberts, Robin Sherwood
Director: David Schmoeller