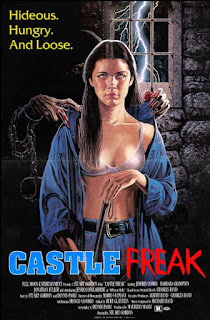 Stuart Gordon's early movies were adaptations of H. P. Lovecraft stories, with a lot of help from scriptwriter Dennis Paoli.  The Re-Animator and From Beyond featured amazing special effects when considering how low the budgets were, and both made Jeffrey Combs and Barbara Crampton into cult superstars.  The same happened eventually happened to Gordon himself.
If there was one thing his first two feature films made clear it was that Gordon and Paoli weren't afraid to push boundaries.  The Re-Animator was one of the early movies to get an unrated director's cut released on video, as the cinematic version had to be cut down significantly before it hit the theaters, much of it involving infamous scenes involving a naked Crampton and lecherous severed head.  From Beyond upped the gooey effects as well as the sex and, despite a limited cinematic release, became a cult hit on video.  Thus Gordon's eventual work for producer Charles Band, and Band's Full Moon Studios, was understandable.  It pretty much allowed Gordon to do what he wanted.
Castle Freak came after an attempt by Gordon to break into mainstream action films with Fortress, a movie featuring Christopher Lambert breaking out of a high-tech prison in a dystopian future United States.  He had passed on directing Paoli's Body Snatchers to do the movie, but after it didn't perform as well as expected went back to his roots with Castle Freak.  Based on a short story by Lovecraft called "The Outsider", Gordon came up with the scenario and Paoli again did the writing and, as an added bonus, he once again brought back Combs and Crampton.  However, instead of another dark-humored romp, Castle Freak turned out to be a rather rough and disturbing film.
After the death of the Duchess D'Orsino (Helen Stirling) the castle goes to her nephew John Reilly (Combs).  Accompanying Reilly to Italy are his wife Susan (Crampton) and daughter Rebecca (Jessica Dollarhide).  Their daughter is blind due to a car accident which also took the life of their young son JJ (Alessandro Sebastian Satta), an accident that Susan blames John for.
While taking inventory of the castle in order to turn it around for quick sale John loses track of his daughter, who follows a cat down into a dungeon.  The dungeon is inhabited, a fact of which Rebecca is unable to convince her parents, or the police, once strange things start happening.  The police are interested, however, when a local prostitute (Raffaella Offidani) goes missing at the castle, though John protests his innocence to the local officer in charge (Luca Zingaretti).  It turns out that the creature dwelling in the castle is a mutilated man (Jonathan Fuller) that is now loose and free to roam, killing any of those that get in the way of his appetites.
While the head scene in The Re-Animator is definitely hard to watch it was at least played a bit lightheartedly.  Castle Freak, on the other hand, takes itself quite seriously, and the effects are still well done.  Unfortunately, that means scenes of sexual mutilation of the prostitute (involving acts of cannibalism) are as disturbing as they can be, as well as apparent mutilation of the Freak itself.  There is some debate, due to the way it is filmed, if certain parts are still present on the title character, but it is still surprising to find a movie, even if direct to video, that would go so far as to show these scenes.
Jeffrey Combs is a hammy actor which, honestly, is what I have always liked about him.  He knows what roles are best for him, and he gives everything he has.  This is really the only time any humor, albeit unintentionally, pops up.  Occasionally his delivery, especially involving the mirror scene, illicits a bit of a chuckle.  However, it is when he reels it in a bit is where things work here, particularly with the conversation between John and Susan that leads to him returning to his alcoholic ways.  It's some great dialogue by Paoli, and some truly great performances from both Barbara Crampton and Combs at this point that truly changes the mood of the movie, which up to that point is creepy but kind of slow.
That, more than anything, is probably why Castle Freak is the outlier of Gordon's first three Lovecraft films.  Once the revelation of how broken their relationship is comes out a whole series of events that leads to the disturbing, and ultimately more interesting, parts of the plot occur.  Previous Gordon movies have had otherworldly fish-things, killer dolls and re-animated cats quite early on, keeping things moving as much as possible.  The castle, owned at the time by Charles Band and used to film a number of Full Moon releases (including Gordon's adaptation of The Pit and the Pendulum) definitely lends itself to being a great background for a horror flick, but way too much time is spent setting up the location and story before things get moving.  Also, most versions of this movie are the pan-and-scan that was released to video stores, where if one can see the widescreen version (as this was originally meant for a theatrical release), it is much better.
It is definitely a return to form for Gordon after trying a number of things, from low budget science fiction to major Hollywood blockbusters, and I understand why it has enough of a following that it was recently re-made.  Budget, as usual, doesn't seem to be a problem with Gordon, since he always manages to hire people who know what they're doing when it comes to prosthetics and make-up work, and some of the best of any of his movies is on display here.  Unfortunately this is one of the times where the movie takes a bit of time to get going and, when it does, it will definitely have some people walking out of the room.
Castle Freak (1995)
Time: 90 minutes
Starring: Jeffrey Combs, Barbara Crampton, Jessica Dollarhide, Jonathan Fuller
Director: Stuart Gordon