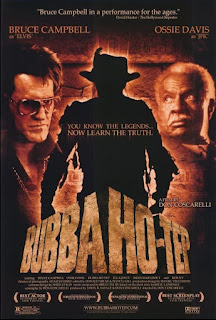 One would think Don Coscarelli would have had a bigger, more recognizable career.  He is, after all, the man behind Phantasm, one of the most recognizable horror films of the 1970s.  While kind of losing its way in the fourth installment - due to the usual budget issues preventing Coscarelli from pursuing the story like he wanted - it produced two successful sequels.  The original also led to The Beastmaster which, although hated by André Norton fans for taking the rights to her book and then making the movie something totally different, became a big hit on cable in the early 1980s.  It's cheap, b-rate sword and sorcery, but it's still better than a lot of other contemporary movies of its type.
Despite all this and a history of good movies (many of which, unfortunately, are difficult to find either streaming or on physical media), Coscarelli often found himself struggling to get the Phantasm movies made.  So, when he decided to make a screen adaptation of Joe R. Lansdales short story, "Bubba Ho-Tep", the strange plot of the story meant that he was once more on his own.  However, with a little help from his friends, it got made, people saw it and, like The Beastmaster, it may not have been a huge theatrical hit but it soon became a well-known, well-watched and well-respected movie when released on DVD.
Elvis Presley (Bruce Campbell) is counting out this final days in a rest home in Mud Creek, Texas.  The death rate at the rundown facility is understandably high, so no one notices when some of the guests start passing away of mysterious circumstances.  Those circumstances come to light when John F. Kennedy (Ossie Davis) - or at least an older African-American man who believes he was dyed black after Lyndon Johnson's attempt to kill him went wrong - is attacked by an unknown creature.
Kennedy just happens to be an expert on the occult and arcane, and the two soon work out that the deaths are being caused by an Egyptian mummy (in a fancy hat and cowboy boots) that escaped imprisonment in its sarcophagus and is now feeding on the souls of the residents.  Knowing what will happen if they go to the staff for help the two elderly men must take matters in their own hands to save their souls and those of everyone else in their facility.
I have said before that quirky ideas for movies don't always work out the way they are intended.  They look great on paper, but in practice they are too self aware or the writers and director simply don't know where to take the humor (or the horror) beyond just the opening premise.  Bubba Ho-Tep is one of those times where the idea succeeds, probably because Coscarelli already had a short story on hand that proved the concept workable.  This seems to be a bit of knack of his, as he managed to follow this up by successfully adapting John Dies at the End, David Wong's strange novel about alternate universes and time travel.
Much of the reason the movie is successful is that he and his actors aren't winking at the camera the whole time, acting like it's all a big joke the audience should be in on.  Bruce Campbell plays Elvis (or Sebastian Haff, depending on if one believes his story) as a tired old man with lots of regrets rather than a caricature.  Sure, the white jumpsuit makes an appearance, but largely we're shown a man who has had to deal with being humble for so long after having his day in the spotlight, and may just be what he says he is.  There is less ambiguity with Ossie Davis's portrayal of JFK, since it is pretty obvious that, despite most of his faculties being intact, he has sunk into his delusion in order to separate himself from the reality of the place he is in.  It's in no way a true representation of mental illness or senility, but one gets the feeling that whatever Jack's real name is (it may have even been John Kennedy, perpetuating the fantasy) that his ability to cope with his depressing surroundings hinges on wrapping himself up in his fantasy.
By necessity almost all of the action takes place within the rest home and its grounds, and rarely do we see many of the other residents or staff.  Also, don't expect a soundtrack full of Elvis music, as that would have cost more than making the actual movie.  Surprisingly, though, the effects aren't too bad.  KNB agreed to work with Coscarelli on the movie at cost, so the makeup on Bubba Ho-Tep looks great.  The scarab beetle at the beginning is a different story,  looking almost as bad as something one would see in a '50s b-movie, but the fight between it and Elvis is still done well.
Bubba Ho-Tep didn't have the biggest chance in the theaters, with a limited amount of prints made and Coscarelli largely having to roadshow it in some cases.  Still, I was one of the lucky ones to get to see it on the big screen, and seeing it years later it still is quite a fun movie.  The humor is vulgar - thus the R rating - and it's not a thrill-a-minute horror film, but it still has great performances and atmosphere throughout, and eventually made enough so that the Phantasm series could get a conclusion, even if Coscarelli himself wasn't able to direct it.
Bubba Ho-Tep (2002)
Time: 92 minutes
Starring: Bruce Campbell, Ossie Davis
Director: Don Coscarelli