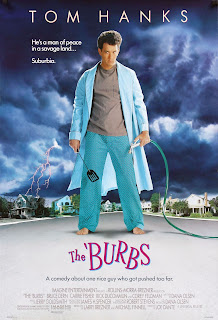 The 'Burbs is kind of a strange film in Tom Hanks's career.  This came out at a time when he was nominated for an Oscar for his role in the comedy Big, and he was leaving his more juvenile films such as Bachelor Party behind and quickly becoming one of the biggest stars in Hollywood.  The 'Burbs,  hammered out during a writers' strike, finds Hanks almost regressing to playing the sarcastic character he had in many of his previous comedies.
Though presented as another Tom Hanks comedy this one was directed by Joe Dante, who at that point was most well-known for Gremlins.  Many of his past movies, whether horror or science fiction, had an element of dark comedy, but this was the first time Dante decided to go with a script that flipped that around.  Written by Dana Olsen and heavily improvised by members of the cast, the movie was a box office hit but was hated by critics when it first arrived in theaters.
Ray Peterson (Hanks) is on vacation from his job.  His wife Carol (Carrie Fisher) would like for them and their son Dave (Cory Danziger) to head out to their house on a lake, but Ray insists on staying home.  What he doesn't tell Carol is that he, along with neighbors Art (Rick Ducommun) and Rumsfield (Bruce Dern), have taken an interest in the Petersons' new next-door neighbors, the Klopeks.  Living in a rundown house with strange sounds coming from the cellar and the family rarely being seen during the day, the trio soon let their imagination run wild, thinking the Klopeks to be anything from vampires to serial killers.
After it appears they may have something to do with the disappearance of an older neighbor named Walter (Gale Gordon) they up the surveillance, going through the Klopeck's garbage and spying on them at night.  Fearing their husbands may be taking things too far, Carol and Rumsfield's wife Bonnie (Wendy Schaal) decide that it's time to greet the newcomers, who turn out to be an odd bunch, consisting of Dr. Werner Klopeck (Henry Gibson), his brother Reuben (Theodore Gottlieb) and their nephew Hans (Courtney Gains).  Though the wives are content to leave well-enough alone, the three men plan to find out what the Klopeks are up to once and for all, and to disastrous consequences - much to the enjoyment of Ricky Butler (Corey Feldman) and his friends, who use the goings-on in the neighborhood for their personal entertainment.
While the critical drubbing was definitely uncalled for I can see where there were some issues with this film.  Dante often uses directing clichés to add humor in The 'Burbs, and sometimes they just don't work.  A quick zoom-in/zoom-out is used in one scene, and rather than being funny it goes on too long and is an example of killing the joke.  On the other hand, another set of shots showing the suspicious looks of all the neighbors as Hans suddenly makes a daytime appearance - to the point of even focusing on the eyes of Queenie, Walter's dog - is hilarious.  In addition, Art is too much the wacky sitcom neighbor, and Rick Ducommun's performance can grate a bit.
That doesn't overcome all the good in the film.  Hanks plays the role of Ray almost like a proto-Dude, while Bruce Dern plays the military-obsessed Rumsfield as straight as possible.  Feldman is definitely a likeable addition, particularly as his his enjoyment hints that this isn't the first time all the neighbors have made fools of themselves.  Meanwhile, Carrie Fisher obviously had some easy chemistry with Hanks as the marriage comes across quite believable.  On the other end, Henry Gibson plays Doctor Klopek as a cultured, but somehow menacing figure.
The violence in this is quite in the style of Looney Tunes cartoons, despite the fact there is some dark humor toward the end.  Also, the finale doesn't disappoint, and Dante remembers to do a payoff with the horror references.  Add in usual Dante character actors Dick Miller and Robert Picardo as a pair of garbagemen having to deal with the goings-on with the neighbors and, while not a perfect comedy by any stretch, it's still a wonderful send-up of both horror films and the underside of suburbia.
The 'Burbs (1989)
Time: 102 minutes
Starring: Tom Hanks, Bruce Dern, Rick Ducommun, Carrie Fisher, Wendy Schaal, Corey Feldman, Henry Gibson, Theodore Gottlieb, Courtney Gains
Director: Joe Dante