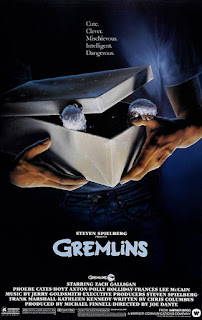 What defines a Christmas movie?  Unfortunately, it's usually sickeningly maudlin, saccharine displays of family and holiday cheer, often times riffing on the same old themes of A Christmas Carol and It's a Wonderful Life.  That may be why so many people are more than happy to include Die Hard alongside Miracle on 34th Street for their holiday viewing.

Despite what some may think, Die Hard, with all its violent themes and satire of '80s movies cliches, is also at heart a movie about a man who just wants to get together with his family (perhaps for the last time) on Christmas.  It has some dark themes, but so do current modern standards like A Christmas Story and National Lampoon's Christmas Vacation.  The best scenes out of both recall not just the happiness of the season (which is largely marketing anyway), but the real stress that families are under, both emotionally and financially, to make this a good time of year for the children.

Gremlins takes many of those dark undertones of the jolly holiday and emphasizes the fact that not everyone is happy to see this time of year arrive.  Particularly in a year like 1984, when this was made, when the United States was finally starting to see a bit of an economic upturn, but many were still suffering from the previous two years, which at the time had probably been the worst since the Great Depression.  It wasn't just jobs being lost; entire industries went under, taking with them entire small towns and, in some cases, states that depended on those industries.  Almost four decades later a good portion of our nation is still suffering from the events that took place in a relatively short span of time.

The fictional town of Kingston Falls reflects this, with a veneer of small-town America hiding the fact that most of the town is unemployed and owes money to the one person who already has plenty of it: Mrs. Deagle (Polly Holiday).  She is rich enough that even the manager of the bank kowtows to her, and it's at this bank that Billy Peltzer (Zach Galligan) works, under the constant threat of being fired and, from Mrs. Deagle, having his dog put down.  His romantic interest is Kate (Phoebe Cates), a bartender at the local tavern that generally works for free as the owners try to get out from under Deagles's thumb.

Billy's father Randall (Hoyt Axton) is an inventor, often traveling while trying to sell his often malfunctioning products, leaving his wife Lynn (Frances Lee McCain) to largely try and support the family on her own.  Randall, on a trip to a big city and while trying to find shops in Chinatown to sell his wares, stumbles across an out-of-the-way place where he finds a creature called a Mogwai.  The proprietot (Keye Luke) refuses to sell it, but his grandson (John Louie) is more than willing to do so.  There are rules, however: don't get it wet, avoid bright lights (especially sunlight) and never feed it after midnight.

As can be expected, shortly after Billy gets his new pet, one of the major rules are broken: Pete (Corey Feldman), a neighborhood kid, spills water on Gizmo (as Randall ends up naming the Mogwai) and it multiplies.  Unfortunately, Gizmo's offspring aren't as cute and cuddly, nor as well-mannered, as he is.  They soon trick Billy into feeding them after midnight.  This results in them going into a pupal state, finally emerging from their slimy cocoons as vicious reptilian creatures bent on killing everyone in sight.  True to the traditional gremlin, they delight in doing so by making equipment malfunction.

The Gremlins' leader, Stripe, ups the ante by making a beeline for the local YMCA, using the pool to create an army that tear up the town.  This leaves Billy, Kate and Gizmo to clean up the mess.

Gremlins is still a great, dark comedy, meant for older kids (as well as adults) like it was when it originally came out.  There are a few shocking scenes - the food processor, the microwave, the attack on the Futtermans - but looking back now it's hard to understand what the fuss was about.  I'll correct that; at 12 I didn't know what the fuss was about, and why a bunch of "concerned parents" were making a big deal out of content that had been in PG movies since the rating was created.  It wasn't like there was a bunch of f-words flying about and gratuitous nudity - not in this, not in Poltergeist and not in Indiana Jones and the Temple of Doom.  While we have never had our specific Mary Whitehouse to clutch pearls and wring their hands and demand that we censor everything "for the children," we have certainly had enough "concerned parents" make waves.  In this case, this movie was one more step toward creating that bane of modern American cinema: PG-13.

In truth, however, the most shocking scene in the whole movie has nothing to do with little creatures blowing up small town America.  It is when Kate relates why she doesn't like Christmas.  Phoebe Cates nails the delivery on this, as the scene could have either gone hilariously over the top or just fallen awkwardly flat.  It is touching, and underlies why she would be the only one besides Billy that would be able to bear down and do what had to be done.  Compared to her worst Christmas, a bunch of vicious reptiles is nothing.

Years later, these creatures are still a sight to behold.  Gizmo is quite realistic, although not as much involved or integral to the movie as I remember.  Stripe in the end makes a great central villain, not just mischievous but homicidal and dangerous from the beginning.  The rest of the Gremlins, much like the zombies from George Romero's Dawn of the Dead, are both a dark reflection of human beings as well as a satire on the current consumer culture of the time.  This is where it truly shines: director Joe Dante is more than willing to go far off the rails, like most '80s movies of the time, and really let things go beyond the script and get creative.  He had a special effects workshop behind him to do it, and the scene in Dorry's with all the different types of Gremlins aping human society is as brilliant as the biker attack on the mall in Romero's film.

Unfortunately, the forces of political correctness have reared their ugly head over the years, claiming (without much evidence) that the Gremlins were not parodies of all people, but only Black people.  Watching it, it is obviously a false statement.  If anyone was going to get their hackles up it would be the Irish and the Italians, both of which have stereotypes (drinking, violence while gambling) displayed in the bar scene prominently.  As for break dancing, it was an '80s thing; it originated in urban neighborhoods, but so did many things that became mainstream decade after decade.  There is only one Gremlin in the whole bar that even approaches being African-American, and that's the one that appears to be lounging, by himself, enjoying his whiskey and seemingly some jazz music, with his sunglasses on.  In a room full of violent white stereotypes, he's the only one that seems to be not causing trouble.

That doesn't mean that there aren't some scenes that wouldn't be considered problematic these days - largely, the "Asians are magic" stereotype.  Still, this is a movie that focuses in large part on problems in the United States in the early 1980s and, again, with the stresses of actual life rather than the ideal that most holiday films tend to push.  I'm sure there would be a different way of introducing the creatures if the movie was made today, but the lecture about responsibility still rings true today.  So many years later much of the movie is still relevant, and the special effects are more realistic than what we would get in a remake.