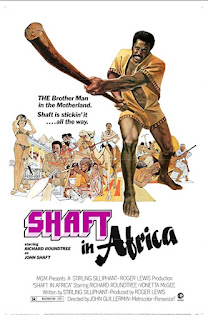 For all that Shaft did to usher in an entirely new genre of filmmaking in the early 1970s, Gordon Parks and Ernest Tidyman knew when it was time to walk away.  Shaft's Big Score! was still halfway decent and had a great chase scene at the end, but it was obvious that blaxploitation films were beginning to change.  Partly due to Parks's son, black films were starting to feature the pimps and drug users as the heroes of the story, rather than detectives like John Shaft.  Neither Parks nor Tidyman had ever set out to make exploitation films, but rather to make a movie for black audiences that featured a lead that would normally be played by a white actor.
They left, but MGM figured there was still some money left in the Shaft series, and they still had Richard Roundtree to play the character.  This time around, instead of the gritty streets of New York, a script was written that sent Shaft on a James Bond-style adventure, complete with exotic locales and beautiful women.  It was written by Stirling Silliphant and directed by John Guillermin, who would go on to direct The Towering Inferno.
John Shaft (Roundtree) is kidnaped from his New York apartment by Emir Ramila (Cy Grant), a member of a tribe in Ethiopia.  He and his associate Col. Gondar (Marne Maitland) are looking to break up a European human trafficking network that is luring young African men with promises of employment but then making them virtual slaves.  Ramila hopes that Shaft will pose as a member of their tribe so he can infiltrate the organization.  As Shaft does, he becomes more intrigued with the offer after meeting the Emir's daughter Aleme (Vonetta McGee).
Unfortunately the head of the organization, Amafi (Frank Finlay), is tipped off about Shaft and several attempts are made on the detective's life.  While Shaft makes his way through the whole process of smuggling Africans illegally into Europe he learns that, for all its veneer of civilization, Europe isn't much different that the U.S. in its treatment of a minority working class.
Ironically, although this is clearly quite removed from the blaxploitation films at the time to the point that this is more a straight Hollywood film that just happens to have a black lead, it is the one Shaft movie that consciously attempts to put forth a message.  Even to this day the extent of what amounts to a modern slave trade is not known, largely because it's off the radar and not limited to Africa.  Still, it is something that one would expect Shaft to get personally involved in stopping, so the whole method of coercing him at the beginning is a bit confusing.
Arguably the best parts of the movie are the scenes in Ethiopia, and Guillermin takes full advantage of his chance to film there.  Haile Selassie was still emperor at the time, so it is interesting to see what was a thriving, rapidly developing part of the world shortly before it became known for a bloody civil war and mass starvation - although some of that was already happening at the time.  A lot of the interest is seeing a part of the world not depicted widely on film at the time, and not depicted in the usual stereotypical Hollywood fashion.
I was initially concerned once I saw how long this movie was.  The first was short and simple, and the second was lengthier, but tended to drag.  However, Shaft in Africa has enough plot and action to fill its running time.  If anything, Richard Roundtree is given more to do and the character developed a bit more.  Even if it doesn't have a big action set piece I find this sequel to be much more satisfying than the first.  Many movies have been up for reassessment in recent years, and this is one that should be.  It was nowhere near the box office draw of the first two, and a Shaft television series (that was cancelled after only seven episodes) killed off any hopes for another movie in the series at the time.  It also unfortunately brought Roundtree's career to a screeching halt as Hollywood eventually began to pivot away from independent movies.
While I had not really looked forward to seeing this, having the impression that it was going to be a cheap attempt to keep the series going after its sell-by date, I was wrong.  So were critics at the time.  Put against other contemporary movies with black stars it does seem a little too Hollywood friendly, but as an evolution in the shaft franchise it fit in perfectly and it was nice not to see another retread involving mafia wars and urban drama.  The first movie will always be the best, but the third shows where the series could have gone if given a bit more of a chance.
Shaft in Africa (1973)
Time: 112 minutes
Starring: Richard Roundtree, Vonetta McGee, Frank Finlay
Director: John Guillermin