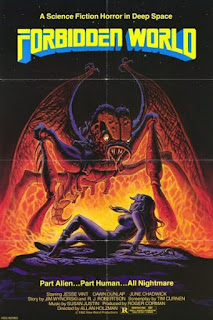 1980 brought us the sequel to the original Star Wars, after three years of everyone trying to ride its back to success.  The Italians pushed out Starcrash, Roger Corman himself followed suit with Battle Beyond the Stars and, for one season before they unwisely decided to ground things on Earth, Battlestar Galactica brought us an entertaining take intertwined with Mormon mythology.

Still, The Empire Strikes Back reminded everyone that there was nothing to beat the original short of expanding on it.  The good thing about both the good and bad ripoffs was that it kept Star Wars alive during a period where cable was in its infancy and VCRs were still a rich man's toy.  So, space cowboys and cute robots for all!

Of course, there was another surprise science fiction hit, also made on a relatively shoestring budget, that featured neither of these.  Instead, it was a haunted house floating in space with a slimy rape metaphor stalking the crew and H.R. Giger inspired sets.  That movie was Ridley Scott's Alien.

Some similar movies started appearing shortly after, but it was mainly after Empire that studios like Roger Corman's New World Pictures started churning out stuff like Forbidden World.  I don't think anyone involved with this would have imagined that, 35 years later, it is actually better than most of the series that inspired it.

Mike Colby (Jesse Vint) is a space ranger finally headed back home.  His robot SAM-104 (Don Olivera) wakes him early as the ship comes under attack by food raiders, the result of a galaxy-wide food shortage.  The other reason for waking him is that his ship, instead of heading back to Earth, has been diverted to the planet Xarbia to deal with a biohazard problem.

It turns out that the remote outpost is running experiments to find a food source to end the crisis.  In doing so, they have created a creature called Subject 20 by splicing genes from terrestrial species to that of a local organism.  There is some argument between Dr. Gordon Hauser (Linden Chiles), the head of the facility, and others on whether or not it should be destroyed.  Mike, of course, is for the simple solution of burning it and getting on with his life.

The creature, originally in a cocoon stage, of course gets loose and starts killing the crew - some devoured, some in slow agonizing fashion.  The main research scientist, Dr. Cal Timbergen (Fox Harris), deduces that the creature is not only intelligent but is converting the bodies of those it attacks into vessels that automatically divide, resulting in an unending food source.  Attempts by biochemist Dr. Barbara Glaser (June Chadwick) to communicate with the creature end in disaster, but Timbergen ultimately has an idea of what he can do to kill it once and for all.  Problem is, he is dying of cancer, and that leaves only Mike and Cal's assistant Tracy (Dawn Dunlap) able to stop it.

I am not going to praise this film for originality or great acting.  Honestly, it sticks to its plot, but in typical fashion makes sure that both June Chadwick and Dawn Dunlap get naked as often as possible.  Both automatically try to bed Mike as soon as he shows up, and that twinge of jealousy is really all there is for a subplot in this film.  Fox Harris is the standout, making Timbergen both creepy and heroic at the same time.

Where I give this credit is for set design, effects, music and direction that is far better than what one would expect.  While the exteriors are still that time-tested part of the California desert where Captain Kirk fought the Gorn, direct Allan Holzman uses creative lighting and angles to recreate the claustrophobic tension that was such an important part of Alien.  The creature itself is much better than expected, and wisely not made too mobile.  The most notable effects, however, are those of the crew members slowly dying and melting as they are changed into self-replicating blocks of meat.

As for the score, Susan Justin's early '80s electronics helps elevate the movie in many ways.  Obviously Holzman was aware of this, as one of the notable scenes is when Mike and Barbara get together early on and everything in the station, from the love making to repairs, is synchronized.

When Roger Corman started producing rather than directing films the quality was hit and miss, as it became more and more obvious that he was getting further from trying to do anything for the sake of art and just trying to make a quick dollar.  This is one of those New World releases that stands the test of time and still a fun watch.