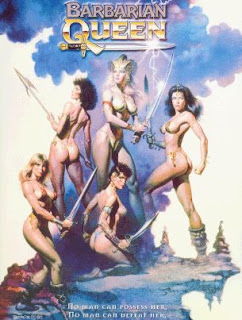 If there was one thing the success of the first Conan the Barbarian film resulted in (other than making Arnold Schwarzenegger a star) it was creating another genre for the exploitation film industry to rip off.  Sword and sandal stuff wasn't anything new, as the Italian movie industry had pumped out countless movies about Hercules, but here there was suddenly a chance to go full out with the boobs and blood.

And that is, really, all Barbarian Queen is.  It simply looks like someone went down to the local gym, grabbed a bunch of women, made a stop at the hairdresser and filmed the movie over a weekend in their back yard and during the off-season where they hold the local Renaissance fair.

Amethea (Lana Clarkson) and Argan (Frank Zagarino) are preparing for their wedding when their peaceful village is attacked by forces led by the evil Arrakur (Armando Capo).  Most of the survivors are taken into captivity.  Amethea's sister Tiniara (Susana Traverso) is raped and captured by two of the raiders, while Estrild (Katt Shea) and Taramis (Dawn Dunlap) manage to evade capture.  Amethea kills several of the raiders herself before hiding in the basement of the royal hut.  Vowing revenge, the women manage to rescue Tiniara, and head to Arrakur's city to free the rest of her people.

Along the way they meet a group of rebels who are planning Arrakur's overthrow, but they are reluctant to aid Amethea.  Disappointed, she and her band decide to take matters into their own hands.  However, Tiniara leaves, and appears to join Arrakur as his concubine.  Amethea herself is captured and, after rebutting Arrakur's advances, is sent to be tortured for information regarding the rebels.

Meanwhile Argan has been sold into the life of a gladiator.  Estrild manages to infiltrate the royal harem, who mainly exist to entertain the gladiators, and inform Argan of Amethea's plans for an uprising.  While some of the gladiators are faithful to Arrakur, the uprising goes forward.

So, what we have in general is a bunch of "barbarian" women in various states of undress, with huge '80s hair, slicing and dicing bad guys.  At least, that's what it seems on the surface.  Though it would in no way make this a good movie, it would at least be a bit more enjoyable.  Lana Clarkson is the one bright spot here, and it is unfortunate that she is more known for being murdered by Phil Spector than for her acting career.  Too bad she, like most of the rest of the female cast, is just there to be repeatedly raped for "motivation."

It's a problem I have with a lot of the '80s movies that Roger Corman produced.  Rape is treated either with humor or as a lazy plot point.  The scene in Barbarian Queen that is often mentioned is when Amethea turns the tables on her torturer by putting him in a Venus grip before pushing him into a pool of acid.  While better than what happens to most of the women in here, just the fact that it seems that even a woman of her strength and standing is considered a plaything in the eyes of the filmmakers is disturbing.  Add to the fact that the torturer looks like every negative Jewish stereotype (he's even wearing a yarmulke) and it crosses a line to where you don't know if the people behind the movie are really disgusting human beings or if this is supposed to be some kind of satire.  If the latter, then I fail to see it.

Even more confusing is the fact that this was made by Héctor Olivera, an Argentinian director whose next film dealt with the disappearances of political opponents in his country while it was a military dictatorship.  In fact, he is a rather well-regarded director, and it seems this may have just been done to get some money together for his real projects.

Yes, I know.  Either way it is objectification of women, but the truth is that heterosexual men do like to see naked women.  However, there is really no enjoyment in watching a film that bills itself as titillation but then focuses largely on female brutalization.  No one (no one I would want to be within spitting distance of, at least) watches I Spit on Your Grave for the nudity.  They watch it to see the guys murdered at the end for the horrors they force upon the protagonist.  Barbarian Queen, however, was billed a cheap, exploitative entertainment. There are so many more directions they could have gone and been more successful.