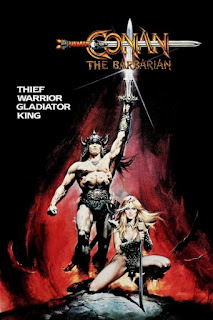 Everyone has to start somewhere.  For Arnold Schwarzenegger... well, it wasn't here.  It was a horrible comedy called Hercules in New York where they dubbed another actor over him to hide his accent and called him Arnold Strong.  That could have been all she wrote for the Austrian bodybuilder's acting career, save for seven years later he became a bit of a star due to the documentary Pumping Iron.

After bit parts and some television appearances, he finally got his break playing the title character of Conan the Barbarian.  The Conan stories, as envisioned by Robert E. Howard, took place in the Antediluvian world of around 10000 B.C., thus making his accent a non-issue.  It also helped that Oliver Stone's script did not contain a huge amount of dialogue for any of the characters.

Young Conan (Jorge Sanz) lives in a northern village, where he learns about swordmaking from his father (William Smith).  One day his village is invaded by warriors led by Thulsa Doom (James Earl Jones).  Conan's mother (Naidiuska) is murdered in front of him, and the boy is sold into slavery to work on a mill called the Wheel of Pain.

Years later, the adult Conan (Schwarzenegger) is the last survivor on the wheel, and his years of hard labor have resulted in him growing strong.  As a result, he is sold to Red Hair (Luis Barboo), and becomes a gladiator.  His success makes him a major attraction, and he travels the known world learning how to fight as well as receiving an education.  One night Red Hair sets him free to do as he would like in the world.

After fleeing a pack of dogs, Conan takes refuge in the home of a witch (Cassandra Gava).  After making love she attacks him, and flees when he defeats her.  He awakes the next morning and continues on his way, only to find the thief Subotai (Gerry Lopez) chained up and left for dead as punishment.  The two become friends and begin to travel together, eventually coming to a city.  When Conan hears that a serpent cult has recently been causing concerns in the city, he decides to investigate to see if they may have something to do with the destruction of his village.  Subotai takes it as an opportunity to steal what he can, and agrees.  It turns out, however, that they are not the only ones intending to rob the cult, as they run into Valeria (Sandahl Bergman), who considers the two men a nuisance but is willing to employ them to help in her robbery.

The robbery is ultimately successful, and Conan finds out the cult is indeed related the Thulsa Doom.  He also finds out that King Osric (Max von Sydow), the ruler of the city, is now in a bind because of the robbery.  No fan of Doom or the cult, he tasks the three adventurers with finding his daughter (Valerie Quennessen), who has joined the cult and gone to Doom's fortress to be with him.  Meanwhile, Conan and Valeria become an item, with him giving her a gem called the Eye of the Serpent, pilfered from the temple, to wear.

While the others debate on whether to take Osric's payment and just disappear, Conan continues on his own, following the pilgrims that are headed for Doom's mountain fortress.  On the way he meets and befriends a wizard (Mako), who lives just outside a cemetery filled with ancient warriors and ghosts.  Conan decides to infiltrate the fortress, first pretending to be a pilgrim and then a priest.  He is quickly discovered, and Doom, along with his enforcers Thorgrim (Sven-Ole Thorsen) and Rexor (Ben Davidson) brutalize the Cimmerian until he is near death.  Subotai and Valeria arrive and bring him back to the Wizard, who agrees to attempt to save his life with their aid.

When the movie came out there was some concern about the amount of violence, which was actually cut down for the theatrical release.  In reality, what ultimately got released was much less violent than a number of other films that were out at the time.  It also has a pretty decent portrayal of a strong female character both for the time and the genre, although the skimpy armor worn by female characters in many video games can largely be traced to here (as well as much of Frank Frazetta's artwork that adorned the editions of the Conan books in the 1960s).

What I appreciated while watching this was how John Milius brought the world and the story alive through a combination of visual storytelling set to the Basil Poledouris's soundtrack.  Wisely avoided is the wisecracks Schwarzenegger would become famous for in his later movies.  In fact, the whole silly dialogue during battles is largely eschewed.  The battles are brutal, but beautifully filmed, and the bad guys often come to satisfying endings.  The death of Conan's mother is told largely between alternating closeups of her and Doom's faces, while Doom's ultimate demise is one of the best scenes in cinema history.

There are flaws, and these usually come out in dialogue.  Surprisingly, not with Arnold, as I have no problem with how thick his accent is at the time, especially since this is supposed to be an ancient warrior, not an FBI agent or kindergarten cop.  It is Sandahl Bergman who seems to have the hardest time with believable line delivery.  Perhaps it is because she was hired more for her physical skill (she is a trained dancer, perfect for many of Valeria's moves) and looks, but her delivery is flat.

Schwarzenegger himself is quite believable in the role.  By this time he had not been competing in bodybuilding competitions for awhile, but had kept in shape, and learned a number of sword handling and fighting techniques prior to filming the role.  I honestly didn't think Jason Momoa did too bad of a job in the remake, but Arnold is perfect for the role of Conan, embodying the fact that the Cimmerian used both his strength and his mind against his enemies.  It's as if he was meant for the role, and it is a shame that Conan the Destroyer went for a tamer, more comedic angle, as I would have liked to have seen Milius and Schwarzenegger make a true follow-up with the story that the Wizard promised.

Subotai is a decent sidekick, but as Gerry Lopez was dubbed with another actor's voice, it's hard to really say much about his performance.  Ben Davidson and Sven Ole-Thorsen were cast largely due to be larger than Schwarzenegger, and thus presenting a believable challenge.  Wisely, again, they are given few lines, their facial expressions and imposing presence establishing everything that the audience needs to know.

Finally, there is James Earl Jones.  While physically not as imposing as those around him, Jones imbues Thulsa Doom with an aura of command and dominance that he is more than willing to demonstrate.  It is this air of mystery and menace that keeps his minions enthralled, and Jones is one of the few people that has the skill to make you believe that this could be possible.

While many try to dismiss Conan the Barbarian as a simple sword and sorcery tale, they fail to look beyond the obvious Joseph Campbell heroic type and see this movie as one of the best examples of how a movie can tell a story through visuals alone.  Why it is not mentioned along with such films as 2001: A Space Odyssey and Quest for Fire in this regard is hard to comprehend.